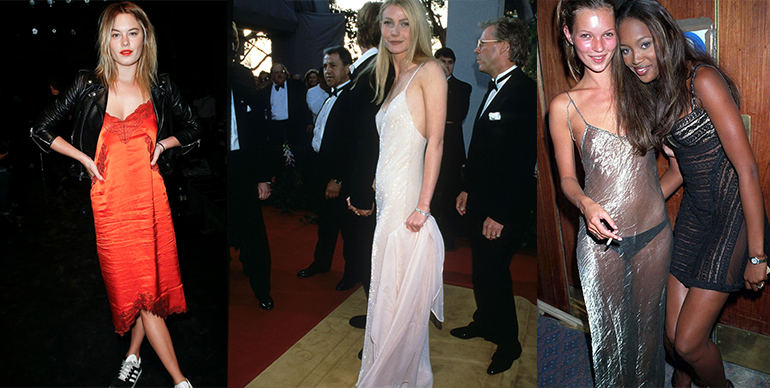 If you’re going to wear a slip dress, do it right. Don’t just toss one over your head all casual and expect to look like 90s royalty. These easy dresses are deceptive and it takes some expert finagling to master their distinct blend of grunge and sexiness. After all, a slip is underwear worn as outerwear. Decades back before grunge was even a word, women would billow through the house in slips at night, avoiding the windows lest someone see them in their undies. Obviously, we’ve come a long way since then, but the legacy of slip dresses still means you must fashion the look you wear with expertise and care. To help you, we’ve assembled a host of 90s models and celebrities who pulled the look off with boldness and grace back when Britney did it again. It’s time you got good at blurring some boundaries once again.

Moss wore many slip dresses worthy of imitation during the 90s, but none quite compare with this see-through design she donned to Elite’s Look of the Year party in 1993. With only panties for marginal decency, the look was so bold it even showed up Naomi Campbell.

It seems whenever there’s a 90s trend to rediscover, the girl to look to is Winona Ryder. She certainly knew how to pull off a slip dress. Here, a velvet violet dress and simple choker turn the star into an elegant gothic princess. Having a super 90s Dave Pirner as her escort just adds fuel to the vintage fire.

Once you’ve mastered the baby doll dress, the next step is to go all princess chic. That’s what Kurt’s infamous lover did with pal Amanda de Cadenet for the 1995 Oscar party. These satin slips and childish tiaras have an eerie immaturity about them. If you’re looking to arouse a little stir with your vintage 90s slip, opt for satin and lace this fall.

She was a starlet of the 90s even before winning an Oscar. Way back in 1996 when she was dating Brad Pitt, Gwyneth wore one of the glitziest slip dresses ever.  This beaded gown from Calvin Klein proved slips could muster enough luxurious oomph to hold their own on the red carpet.

It takes a special love for slips to get married in one, but that’s exactly what this Mrs. Kennedy did in 1996. Decked out in a design by the famous Narciso Rodriguez, Bassette mastered the art of less is more and the decadent side of 90s fashion.

Coco Chanel would have been proud to see Coppola on the 90s red carpet. Her signature look was that of a LBD with slip tendencies. The translucent black hose and pointy-toed heels seemed to hint at the coming trend toward black attire in 2000.

Turlington’s take on the slip hinted at full on scarlet lingerie. Topping the delicate dress off with a leather jacket, this famous model really contrasted the private traditionalism of a slip with its newfound public arena in the 90s.

Slips are back so you might as well get busy wearing them. Just be careful not to go overboard. As much as you love the 90s and these champions of the high-fashion slip, a wise fashionista knows skimpy slips are best worn sparingly.