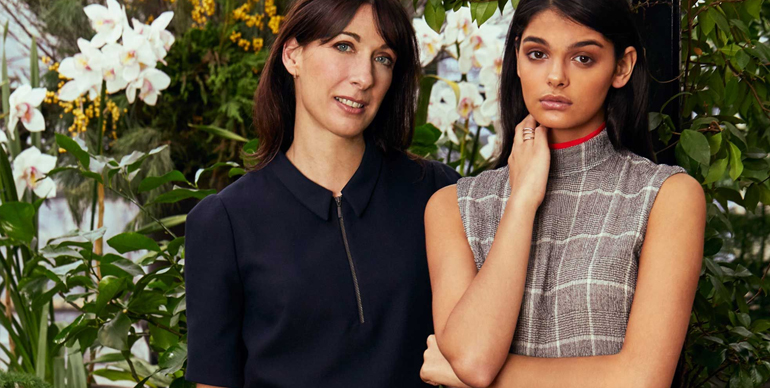 Samantha Cameron, Vogue has said, was like the UK’s Jackie Kennedy. Her style was simple, but modern. Navy trousers and a navy button-down on casual days. A fitted color-blocked Roksanda dress when the occasion was a bit more formal. Though she is no longer in the political spotlight, (her husband David Cameron stepped down as British Prime Minister following last spring’s Brexit vote) Cameron is making headlines as the newest celebrity name in women’s fashion. Her new collection Cefinn debuted last week with a glossy spread in the The Sunday Times. How does the wife of a former Prime Minister break into the fashion industry? Let’s look back on Cameron’s learning years and find out.

Cameron had a busy six years as Prime Minister’s wife. During her time at 10 Downing Street, she worked with the leather house Smythson, volunteered with dozens of charities, and accompanied her husband to public functions and important occasions. She was also busy being a mother. The Camerons were raising three children when David was elected Prime Minister. Samantha had the tricky task of raising three children under the age of 13 while the close eye of the media watched her every move.

Amidst all these commitments, Cameron somehow managed to find time to turn her dining room into a studio and tutor herself in pattern cutting, sewing, and fashion design. It is said that when friends would come for coffee, they might try on a frock or skirt and tell her what they thought. Everyone was sworn to secrecy, though. Cameron was taking no chances. She wanted her debut to be fresh and unexpected, free from pesky rumors. We now know she got her wish.

You can sense a political theme in Cameron’s Cefinn collection. It isn’t an aggressive statement piece. It’s officewear you can feel positive and confident about. Cameron has said she wants her clothes to feel “comfy and appropriate, but… exciting and glamorous. Women need a uniform that they can grab every day but has a little fashion edge.” If this is Cameron’s aesthetic, she’s timed her debut beautifully.

The pantsuit took off as a popular women’s fashion piece last year. In 2017, there are thousands of businesswomen look for clothes that have Cefinn’s distinctive blend of fashion and professionalism. Cameron’s clothes look smart, formal and feminine. Most are navy, black, or khaki accented with poppy red. The Guardian described them as “aspirational in a grown-up, lifestyle-oriented way.”

They also bear a great sense of grace-under-pressure. Samantha Cameron understands that a businesswoman wants to look sharp without being confined to something stiff. “It’s designed,” says Cameron, “for a woman who’s busy, juggling lots of things, who loves fashion but is not obsessed by it.” It’s surprising no one’s decided to try this unique aesthetic before.

THE QUESTION OF SIZE

The Cefinn debut in The Sunday Times featured two models. One looked unnaturally thin. This uncharacteristically slender woman sparked a conversation about Cameron’s target market. Cefinn offers a range of pieces up to size 14, currently excluding the fuller-figured woman. Such a restriction is not rare. However, most brands aimed at Cameron’s specific demographic do go to at least a size 16.

It remains to be seen if Cameron’s future collections live up to those expectations once she’s gotten her feet wet. The slight model controversy has a good ending, though. When The Londoner called Cefinn to ask about the slender models’ health, they spoke with Samantha Cameron personally. She assured them “Cefinn is committed to working with healthy models.” And this isn’t the first time she has expressed support for models’ health. During her time as the highest-ranking wife in the UK, she expressed dismay over a particularly thin model at an Erdem London Fashion Week show.

As Cefinn prepares for a complete launch in the fall, Samantha Cameron must be thrilled. She’s been dreaming of this moment since those lessons in her makeshift studio at 10 Downing Street. It’s too early to say whether she is poised to revolutionize formal women’s wear, but fashion moves fast. Check back in the fall when the new line hits stores.