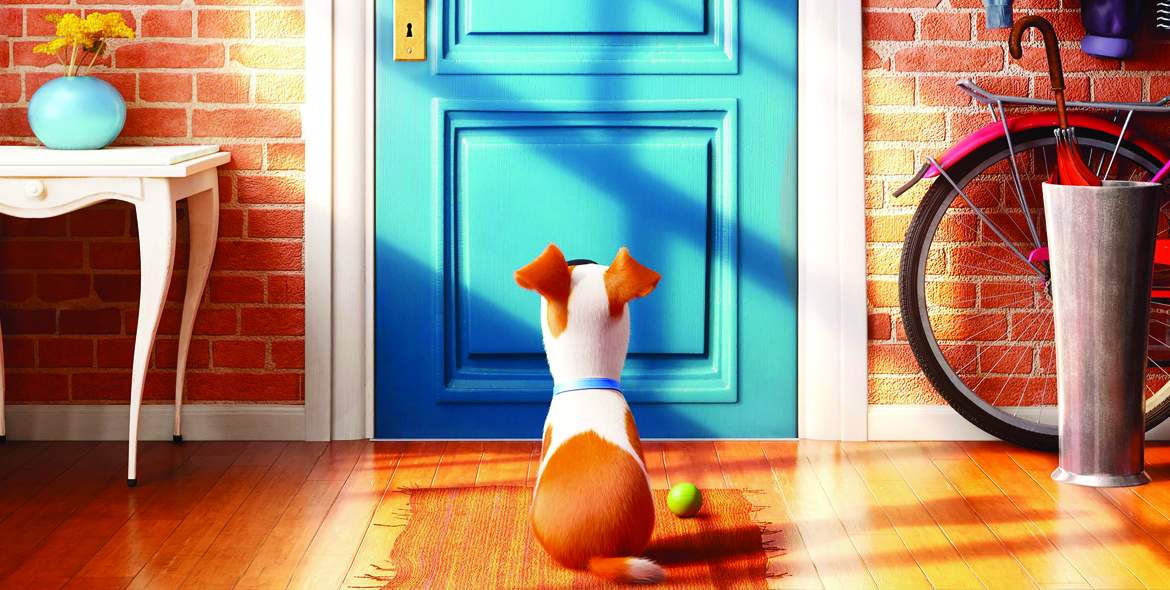 In an industry redundant with sequels and trilogies, it’s exciting when an original idea finds its way to production. The Secret Life of Pets, Illumination’s newest box office offering, is one of these projects. This family-friendly film imagines what animals do all day while their owners are away at work. Centered around the cute, energetic Max (Louie C. K.) and his newly adopted ‘brother’ Duke (Eric Stonestreet), a slew of other playful, colorful characters create a world where dogs travel by pipeline and a band of forgotten pets plot revenge in the New York City sewers. Despite some tired story themes, it earns points for a sound structure and, most of all, for being incredibly cute.

The incident that starts this story is Duke’s adoption into Max’s home. Max is dedicated to his human Katie and prides himself on being her true and loyal companion. Duke’s arrival, predictably, upsets this balance. Suddenly, the two dogs find themselves competing for Katie’s affections. When a careless argument leads them into harm’s way, the two are forced to help each other escape dogcatchers, rebellious pets, and runaway vehicles to get back to their beloved Katie.

It’s hard to deny that Illumination tapped a conceptual goldmine with the talking pets concept. We humans, tend to anthropomorphize our pets on our own, and playing into this fantasy. Writers Cinco Paul and Ken Daurio do this quite well too. Within minutes of being alone without Katie, Max is already moaning phrases like, “She’s been gone forever. She must have abandoned me.” When Katie returns seconds later to retrieve her keys, Max’s musings become particularly comedic.

The film moves at a brisk pace introducing different pets in their respective homes. A few fun paradoxes are thrown in here, such as a poodle who head-beats to hard metal and a lazy cat who raids the fridge, but before long we are headed off with Max and Duke on an adventure in the outside world.

This outside world is, somewhat ironically, is far more predictable than its domestic counterpart. Within minutes, Max and Duke have encountered sly stray cats and a dogcatcher armed with nets. These two troupes similar to an old dog-lover classic: Lady and the Tramp. While on their way to the pound, Max and Duke are intercepted by the Flushed Pets, a gang of abandoned animals who have sworn to enact revenge on humans. The Flushed Pets (a tattooed pig, chameleon, and murderous rabbit) rescue Max and Duke from the dogcatchers and usher them into the sewers, all the while resembling a mixture of Toy Story story-telling devices (Sid’s mutant toys and Lotso’s gang of thugs).

From this point on, the film expands its cast of characters and sinks deeper and deeper into Toy Story imitations. Gidget, Max’s adoring neighbor, leads these characters, along with a band of dogs, cats, and a hawk make their way through the City in search of their lost friends. While brief asides follow their progress and provide comic relief, the search is ultimately distracting, diverting attention again and again from Max and Duke’s budding friendship. In the scenes we do get to spend time with the two dogs take it has a similar trajectory as Woody and Buzz in the Toy Story franchise. A scene where Duke returns to his old home only to find his owner no longer lives there echoes Jessie’s song, ‘When She Loved Me,’ theme for theme.

In the end, everyone returns home safely to greet their humans after a long day. Charming, and once again humorously familiar, the film finishes on the high note it began, which does leave a satisfied sense of completion. Overall, The Secret Life of Pets is nothing new, and perhaps something a little too familiarly old; but then again, I loved Toy Story. Didn’t you?