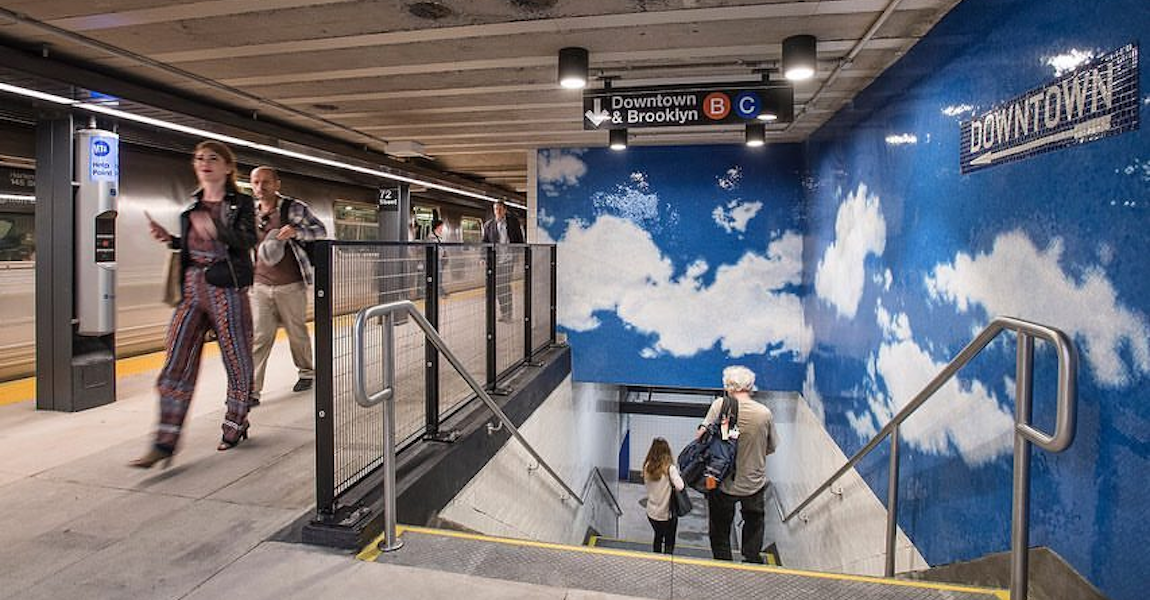 If you spend any amount of time on New York City’s subway system, you know it’s a pretty unpredictable place. Will your train be on time – or get delayed in a dark tunnel due to track traffic up ahead? Will your particular car feature blasting heat or ice-cold air conditioning? Who can tell, really? Is this train headed towards Brooklyn or Queens? Honestly, just go with it.

But some metro stops in NYC are also vibrant art spaces, filled with musical performers, bustling commuters, and even beautiful art spaces. The latest installation to be revealed by the MTA Arts & Design commission is by artist and activist Yoko Ono. It is called “SKY,” and it’s located at the newly-reopened 72nd Street B/C subway station. The Yoko Ono subway art was also created as a tribute to The Beatles‘ John Lennon – which is fitting as it’s located directly under Ono’s home at the Dakota.

“I’m thrilled that my new work, ‘SKY,’ will be opening at the 72 St subway station just steps from my home and Strawberry Fields, which I created in memory of my late husband,” Yoko Ono said. “It will bring the sky underground, so it’s always with us. I hope this will bring peace and joy to my fellow New Yorkers for many years to come.”

“‘SKY’ comprises six separate mosaics spanning both station platforms and mezzanine. The mosaics altogether measure 973 square feet and show a blue, cloud-filled sky embedded with written messages of hope,” the MTA explained in a statement. The messages behind this artwork are “Imagine peace,” “Imagine love,” and “Dream.” Two more mosaics are set to be installed this October.

“As riders move through the subterranean subway station, the messages of hope appear in the clouds as the perspective shifts in each mosaic,” the statement continued. “The transformation of photographs into mosaic sky paintings with subtle gradations in color and tone has created a visually striking station environment. Two mosaics are above the mezzanine stairs leading to the southbound platform where two more pieces are featured, and one mosaic each is installed on the northbound platform and in the main turnstile area on the mezzanine level.”

This dreamy artwork definitely makes the daily grind a little bit brighter – and will surely become a tourist destination for the city’s visitors.

You can visit this Yoko Ono subway art at the 72nd St. station B/C train stop in New York City.

More art murals to check out.
More creative wall art around the world.
All photos via Patrick Cashin/MTA