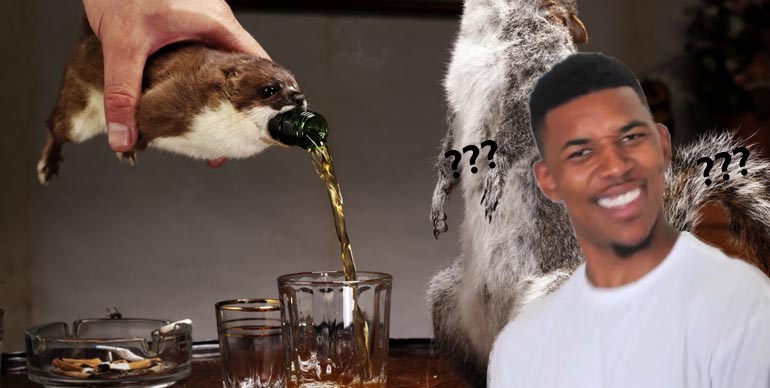 Beer can make you do some pretty crazy sh*t. Your vomit-covered night on the bathroom floor isn’t beer’s only feat, though. What if I told you beer itself is a crazy thing? Sometimes, the brewmasters go a little mad. As the craft beer revolution becomes more and more commonplace, artisans are growing hungry with the need to reinvent their brands with unique beer creations. One way to do this, and seemingly their strategy of choice, is to create a beer so strange that people can’t help but take notice. Here are seven of my favorite weird beer combinations. Get ready to be stunned, excited, and awestruck.

“THE END OF HISTORY”

Potency on its own is nothing. 50% ABV may be detrimental to drink but it’s not that innovative. Brewdog could see they needed a more compelling selling point than “the second strongest beer in the world.” With some smarts and a whole lot of gall, they found their answer in taxidermy. When you paid $765 for one of only 12 bottles of this limited edition beer, you were paying for far more than the potency. Each bottle was contained within the taxidermies of squirrels or weasels.

It may be artistic to put a bit of yourself into your beer, but the folks at Rogue Ale took the idea to a whole new level. While looking for a new source of yeast, a naïve employee joked that company founder John Maier’s beard would be perfect for growing yeast. Someone was crazy enough to try it, the tricked worked, and now we are left with a beer literally pulled from the face of its creator.

FROM THE STOMACH OF ELEPHANTS

You wouldn’t think beer made from coffee beans digested by elephants would be a lucrative enterprise. Sankt Gallen Un was will to make the bet, though, and look where it got them. Within minutes they had sold every single $100 bottle. This beer really is as disgusting as it sounds. Rather than using civets to digest distinct Black Ivory coffee beans, the company had their elephants do the work. Once the elephants took a sh*t, the digested beans were made into coffee and then brewed into Kono Kuro. Thirsty yet?

Pizza and beer make a great meal. Mamma Mia! thought they’d turn the meal into a one-handed wonder. These innovative brewers created this strange beer by straining a Margherita pizza puree and then filtering through other pizza ingredients. Would you ever put tomatoes and onions and cheese into your alcoholic drink at the same time? Probably, you weirdo. So give this unique beer a try next time you’re in the mood for a slice.

I’ll go through this one quickly. Instead of elephants, this time, we’re dealing with a coffee brewed from the droppings of civet cats. What is this fascination with fecal matter, beer world? Maybe it’s a test to see if the alcohol can coax people into drinking poop.

If you thought pizza beer was weird, take a sniff of Flying Dog Ales’ Oyster Stout. There’s something a little bizarre with carbonated liquid Oysters. Oyster stouts could easily just be another bizarre recipe birthed in the modern heights of craft brewing madness. Or is it something more? In the 1800s, brewmasters discovered that oyster shells, rich in calcium carbonate, were as an effective clarifying agent for finished beer. Fast forward to the 1920s and a bold New Zealander started adding oyster juice to his beer batches. Thus, this aquatic blend was born.

Beer for kids. Uhh..who would go into the beer marketing business thinking, “This would be an excellent alcoholic drink for tween girls?” In China and Japan, it seems there are a few advertisers who don’t quite legal drinking ages. Sure, the fruit-flavored Sanrio beers taste delicious, but how do you justify stamping the Hello Kitty mascot on a six-pack? It’s no surprise the FDA have their eyes on this rebellious company.

Try These Famous Drinks From Movies