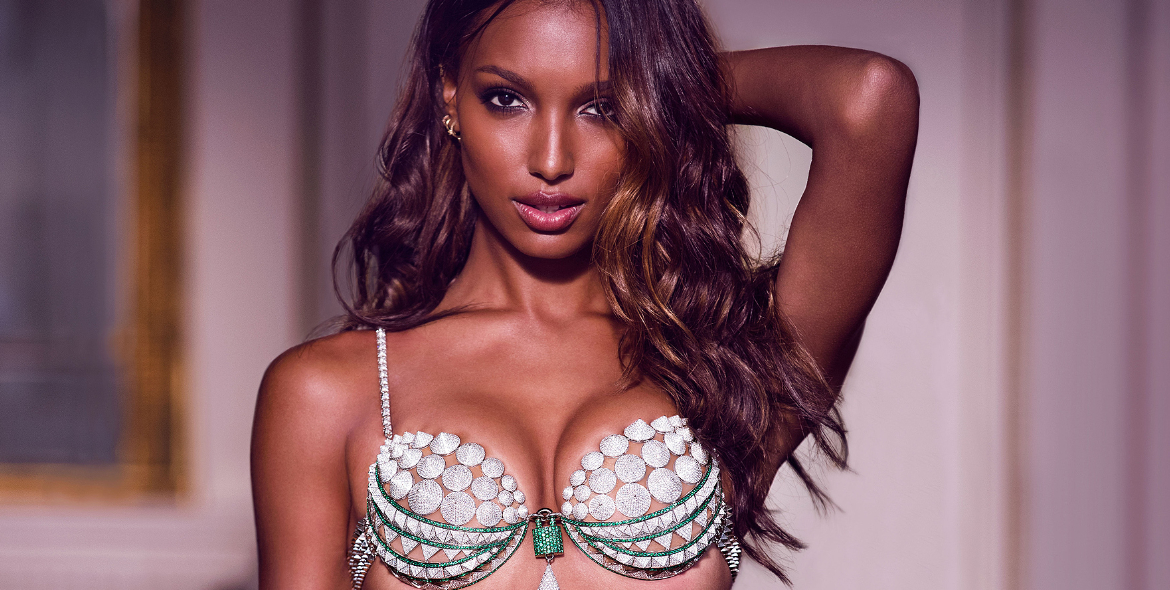 If you think you know what an expensive bra is, you haven’t seen Victoria’s Secret’s Fantasy Bra collection. If you thought the company’s most stupendous achievement was its infamous annual fashion show, you are clearly missing out. Ever since the Fantasy Bra debuted in 1996, the company has been experimenting with jewel-studded cups and gold filigree straps. Ranging anywhere from $1 million to $15 million dollars, these designs have become yet more iconic proof that Victoria’s Secret is the international bra queen. Not only are her designs the world’s sexiest bras; they are the most expensive. The 2016 Victoria’s Secret fashion show coming up on December 9th, so to prepare you for this year’s Fantasy Bra, let’s look through the glamorous evolution of the most expensive bras in the world.

Before it was the Fantasy Bra, Claudia Schiffer adorned the cover of Victoria’s Secret’s Christmas catalog in this $1 million “miracle.”

It looks pretty plain and white to be one of the most expensive bras in the world, but this sophomore design’s diamond-studded hem and a centerpiece made still made it a $3 million investment.

With jeweled straps and intricate lace, the first of Victoria’s Secret bra titled a “Fantasy Bra” upped the ante by $2 million. It cost $5 million to bring home this beauty.

Who better than to flaunt one of the world’s sexiest bras than Heidi Klum? The Millennium Bra, studded with dozens of diamond stars, blended sexy and expensive to the tune of $10 million.

Victoria’s Secret’s most expensive bra was ruby red hot. Reaching the pinnacle of expensive bras at the turn of the century, this hot red bra cost a whopping $15 million!

With a big bad jewel connecting two bejeweled cups, this bra went down in cost while going up in design aesthetic. It was $12.5 million for the Heavenly Star Fantasy Bra.

With a Disney princess vibe, this bedazzled bra continued the aesthetic development of expensive Victoria’s Secret bras. The price dropped too, to $10 million.

Despite its uninspired name, the 2003 Fantasy Bra was one of Victoria’s Secret’s most successful. It had a Wonder Woman look to it, brought Heidi Klum back for a third time, and was the first million-dollar bra to feature a jewel centerpiece pendulum.

A close examination of this bra shows detailed thematic design work. Perhaps this $100 million creation was the birth of the Victoria’s Secret Angels.

I never thought I’d see a cross between Mrs. Claus and Wonder Woman, but this is it. The metallic structure of this pricey holiday bra evokes bicycle wheels and gears, giving the $12.5 million design a mechanical feel.

If the White Witch of Narnia were a sexy millionaire, this is what she’d wear. The foliage-inspired wings and crystalline jewels appear like $6.5 million snow.

Here’s your $4.5 million Christmas Eve dalliance. The Victoria’s Secret fashion show is a December affair, so it was inevitable the holiday spirit would creep in at some point.

This was the first black bra to become one of the most expensive bras in the world. Valued at a modest $5 million, this bra features gold and silver swirling on a black diamond backdrop. If that’s not sexy, I don’t know what is.

This second entry in the black Fantasy Bra canon looks a little like two apple pie crusts clamped onto Marisa Miller’s breasts. At least the cost is back down to $3 million.

We’ve been through Wonder Woman, angels, and black diamonds, and now we land in exoticism. Though this bra sounds like an homage to Marilyn Monroe, it seems to be a celebration of pastel feathers.

Is this The Little Mermaid staged as a runway show? This turquoise bra is definitely right out of a sea fantasy. The costume almost outshines the $2.5 million bra. Impressive!

Back on land, this bra feels right out of Alice and Wonderland. I’m beginning to wonder if $2.5 million is what it costs to be an adult Victoria’s Secret Disney princess…

Finally, we’re back to the truly expensive Fantasy Bra more focused on being Victoria’s Secret’s most expensive bra than part of some runway theme. The price is back up too, at a whopping $10 million.

Worn by two veterans from past Victoria’s Secret fashion show, Adriana Lim and Alessandra Ambrosio, these may be the most interesting of the annual collection. With clear Indian influence, these rare designs show a surprising cultural awareness in Victoria’s Secret bras.

Last year’s luxurious bra claimed was inspired by everyone’s favorite explosions: fireworks. It looks more like a costume from Waltz of the Flowers. Firework or flower, the $2 million bra certainly was colorful and one of our favorites at Richard Magazine.

A bejeweled bra with turquoise accents is the newest Fantasy Bra in the collection from the 2016 Victoria’s Secret Fashion Show. Jasmine Tookes wore this exotic look in Paris over the weekend. If you’re looking for a sexy $3 million gift for your lady, you can’t beat this.

Now you know the full history of the most expensive bras in the world. The 2016 Fantasy Bra has already been revealed, but it won’t be worn until the 2016 Victoria’s Secret fashion show on December 9th. These can tide you over while you wait.