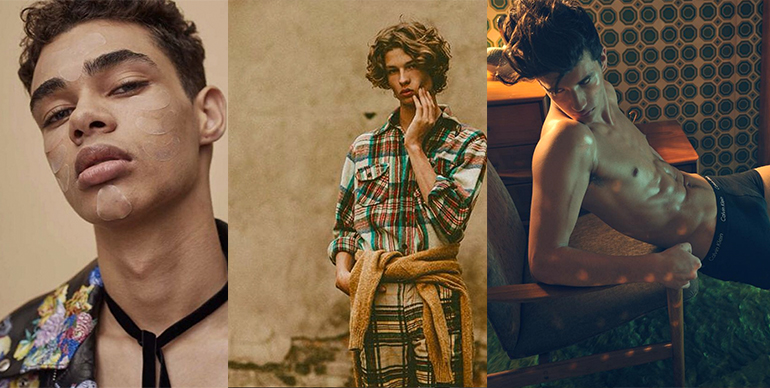 New York Fashion Week: Men’s has started and this year the show features some unique up-and-coming models. The show itself is only in its fourth season. It’s fitting for a newer show to debut new models. Many of the young models have never walked a show before, and for a few of them, this is their first week in NYC. These boys hail from England, Buenos Aires, Thailand, South Korea, and more. What a welcome, to be ushered into the fashion community of New York City at NYFW. Here they are, the group who are being called one of the most diverse castings for a major fashion show. These are the models to watch at this year’s New York Fashion Week: Men’s.

Lanky, young, and platinum blonde, Dagsen Love is definitely a pretty boy. The Phoenix native now hails from Wilhelmina, New York, where he is starting to build a young career for himself. His fair features and sad eyes make him a smart choice for the moody aesthetic on most New York Fashion Week: Men’s runways. His beautiful golden locks will also cause quite a stir this week. Love has so much going for him already at the ripe young age of 16, with the right choices he’ll have a stellar modeling career.

Mather has already made a name for himself as one of South England’s most intriguing young models. The 19-year-old has ambitions beyond the runway, dabbling in carpentry in his spare time until he’s ready to make it his career. He’s also one of the best skateboarders in East Sussex. According to Mather, the best things about modeling are “traveling, new experiences and good dough.” With a convincing mop of dark blonde hair, stubborn pout, and chiseled cheekbones, you can bet Mather will emerge from NYFW as one of America’s newest models to watch.

Birkner started his career in his native Buenos Aries. A model and surprisingly impressive soccer player, the 18-year-old left athletics behind for a full-time chance at modeling in the City. Sultry and muscular, Birkner is an impressive figure. He’s the guy you’re going to see showing skin and flaunting his big guns in steamy underwear commercials. He already did a shirtless, pretty-boy photoshoot for Vanity Teen two years ago. You can bet Birkner will be one of the top sexy young models at this year’s NYFW.

Samuels is the most colorful of NYFW’s 2017 models. Check out his Instagram. The fashion world could use more models who applaud art and natural beauty on social media. Samuels has an iconic look about him. In a fashion shoot with Annabel Lee back in 2015, he rocked a Zara fedora with gold-metallic shades like a pro. Now, he still has that professional air about him, a confidence rare in new models. With a handsomely chaotic head of hair and the assurance of a seasoned model, Liam Samuels will definitely turn some influential heads on this week’s runway.

To call Wook one of the young models of this week’s fashion week is a bit misleading. He started working as a freelance model in South Korea in 2011, right out of modeling school. Since he was signed in 2013, the Korean model has walked dozens of catwalks from China to Milan with names like Domenico Dolce. This is simply Wook’s first New York City show. With all that experience under his belt, I can’t imagine Wook falling to the wayside after NYFW is over. You’ll see plenty more of this model after his New York debut.

Raised in both Canada and the United States, Delaunay has a traditional Western look to him. He’s got muscles and a crew cut like a classic farmer boy from his native North Dakota should. Much of this new model’s fame started with his Instagram account. Like Gigi Hadid and Cameron Dallas before him, Delaunay posted his way to popularity with gym pictures and All-American charm. Now, he’s about to make his fashion runway debut in New York. Get ready to see this face in American ad campaigns very soon.

Are you bout that life

Smithers was in the right place at the right time to start his career. A young photographer spotted him on a bus and handed him a business card. Soon, he was talking to agents and getting jobs with brands in his native Toronto and New York City. When he got a call from Milan last year, Smithers knew he’s made it big. After an incredible first year in the industry, he’ll be making his NYFW debut this week in the men’s show. With a Milan runway already on his resume, this won’t be the last NYC fashion show for 18-year-old Smithers.

There they are. These are the boys you need to keep an eye out for this week. For behind-the-scenes footage and more from New York Fashion Week: Men’s, give their Instagrams a follow.