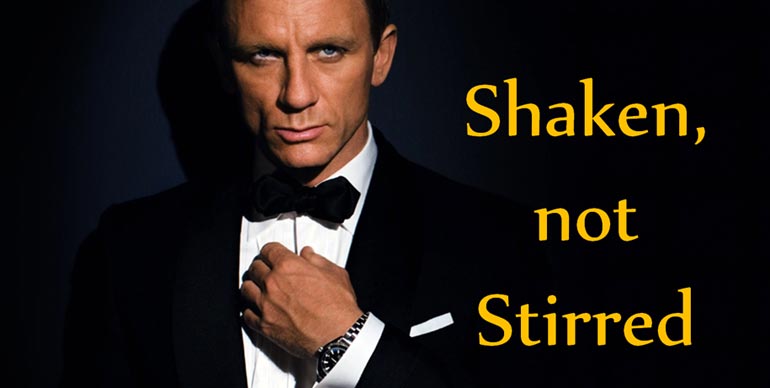 In Hollywood, everything is iconic. From shoes to hairdos to nail polish, Hollywood stars and the characters they play create look after look their eager fans are all too happy to follow. The trends they create extend beyond their character. Stars also coin cars, meals, vacation spots, and catchphrases. You’re probably familiar with Starsky and Hutch’s 1975 Gran Torino and you might have even muttered ‘I’m gonna make him an offer he can’t refuse’ once or twice. Yet, I bet you haven’t mixed a White Russian or settled down with a nice chianti. So for the filmophile who needs a little pick-me-up, here are the most notable famous drinks from movies to satisfy your inner movie alcoholic.

When Ian Fleming said asked for his drink “shaken, not stirred,” the world swooned. The ladies were hot and bothered, and we, gentlemen, wanted to match the sexiness of Mr. Bond. Fleming didn’t make it easy. He may have said martini, but “shaken, not stirred” is far more sexy than descriptive. It wasn’t until Daniel Craig gave us the Vesper 50 years later that we finally learned how to be sexy-chic with our alcohol.

Add a large thin slice of lemon peel and you’ll be a true 007.

When Hannibal Lecter looked straight at us and told us the story of his most iconic meal we all squirmed a little. The hiss was taunting, but it made us all long to be powerfully mysterious. Hannibal was clearly a horrible man with a strange heroic complex. What man doesn’t dream of lording over whomever he encounters, even when locked in a straightjacket and muzzled? Luckily, you can down a glass of chianti without devouring human liver. It’s a dry red wine made from Sangiovese grape. Partake and embrace the taste of murderous mystique!

Want the cult drink of cult drinks? The Dude’s White Russian is your champion. You don’t have to embrace long hair and the weird western vibes of a slightly redneck Los Angeles to enjoy some milky alcoholic goodness. Be specific when you’re making your drink! The Dude would accept nothing less than perfection when it came to his vodka delight. You shouldn’t either.

¾ oz cream (half and half for authenticity)

This isn’t just a classic in its own right. It’s an icon purely because of who drank it in the 1959 romp of a film Some Like It Hot. When Tony Curtis, Jack Lemmon, and Marilyn Monroe use a drum kit and hot water bottle to mix a drink named after the most famous island in the world, how can you resist? The drink really is the perfect combination of sexy and cute topped with a twist of New York sophistication. This will launch your savvy gentleman status with just one sip.

Hannibal Lecter had class. Alex and his Droogs in the eerie dystopia of London were just sadistic teenagers. What was the signature drink that accompanied their nights of “ultraviolence?” A strange alcoholic mixture of milk and Irish Cream. The purity of it all, teens in white blouses and black top hats, sipping milk from 50s milkman bottles, seems picturesque. If you like reverie, don’t watch the rest of the film. Sit back in your easy chair with a Moloko Plus.