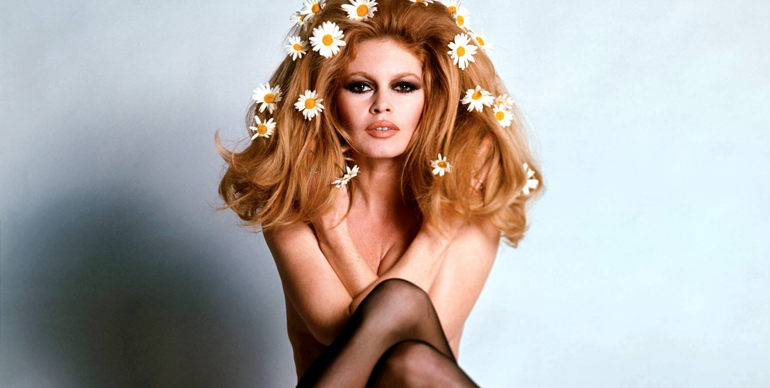 When it comes to vintage French sensuality, there is only one woman to turn to. She is Brigitte Bardot, the young model turned actress who became the “sex kitten” of South France during the 50s and 60s. Just one look at the woman in her prime and you can see why. She had the sharp, seductive eyes and pursed lips of a glamorous actress who knows what the crowd wants to see. Yet, though Brigitte had none of Marilyn Monroe’s deceptive innocence, this siren of Europe knew how to wield her alluring star power with virtuosic character. Throughout her career, she ran the gamut from vaudevillian Judy Garland top hats to provocative portraits in undone trousers. Looking back, Brigitte Bardot fashion is a lesson in the evolution of an aspiring performer into one of the 60s best-known sex symbols. Fashion and fame make a powerful combo.

It all started innocently enough. Before she stumbled across fashion in the late 40s, young Brigitte was passionately rehearsing pirouettes and twirls in Paris. While dancing was her first love, Bardot found unexpected success in fashion as a teen and eventually left ballet for a career in film and modeling. A siren was born.

After a few runways, Bardot was reeling in plenty of work and attending high profile events in designer clothes. Seen here at the Cannes Film Festival of 1954, that famous smolder is already starting to form in her eyes. This may be a classic 50s prom dress, but the woman inside is about to blow the fashion beauty world wide open.

By her late teens, Brigitte was well on her way to establishing the look that would make her famous. Though this one-piece swimsuit takes after famous stars like Marilyn Monroe and Ava Gardner, Bardot wears it with such confidence she makes it her own. Clearly, she would be stealing ideas from the greats as she forged her own glamorous career.

For all her controversial outfits, Bardot knew when to reel it in. One of those occasions was her meeting with Queen Elizabeth II. For this outing, starlet Brigitte wore a Chinese-inspired dress that hung well below her knees and tastefully displayed her arms while keeping everything else under wraps. Take note of the star’s social awareness. It’s not daring or cute to wear your revealing wardrobe in the wrong situations.

By the end of the 50s, Brigitte Bardot fashion was officially taking shape and started to rake in what would become a cult-like following of mesmerized fans. Since culture still wasn’t quite prepared for Bardot’s blatant curves, the star teased them with costumes like this gingham skirt to offset form-fitting tops. Take this lesson to heart. Seduction is a balancing act.

Marilyn Monroe could convince people she was as innocent and naïve as she sounded. Brigitte Bardot was the star who had distinctively young features but always exuded an air of sexual awareness. That mystery behind her eyes gave off a mystical quality too, garnering her nicknames like “The Mermaid” and “Hollywood’s Siren.”

One of the first models to make a guitar part of her ensemble, Brigitte made the rockstar chick work in a more traditional context. It was probably one of her most conservative contributions to fashion and modeling. Of course, she posed nude with the guitar a few times to make up for it. Here, she gives us a uniquely androgynous interpretation á la Miss Garland.

There we many men matched with Bardot, but none could match the famous Gunther Sachs. He was as seductive as she was and could dress to the nines given his experience as a playboy. Their relationship was even more mythical because it all happened during some of the finest years of Brigitte Bardot fashion. Sachs may not have been her best lover, but he was definitely the most fashionable man in her life.

As Brigitte outgrew her Lolita complex, she became a symbol of the Sexual Revolution as both a film actress and runway model. The power with which she wielded her sensuality for the camera set a precedent for other screen sirens of the 60s and 70s. In many ways, she was ahead of her time. Bardot’s bold presence wasn’t really duplicated until after she retired in 1973.

Bardot ended her career in the film and fashion world to pursue animal activism and other causes in ’73. The young girl who dreamed of becoming a ballet dancer had made her mark. Today, we remember her boldness and admire where it brought us. She truly was the first liberated woman of the modern age.