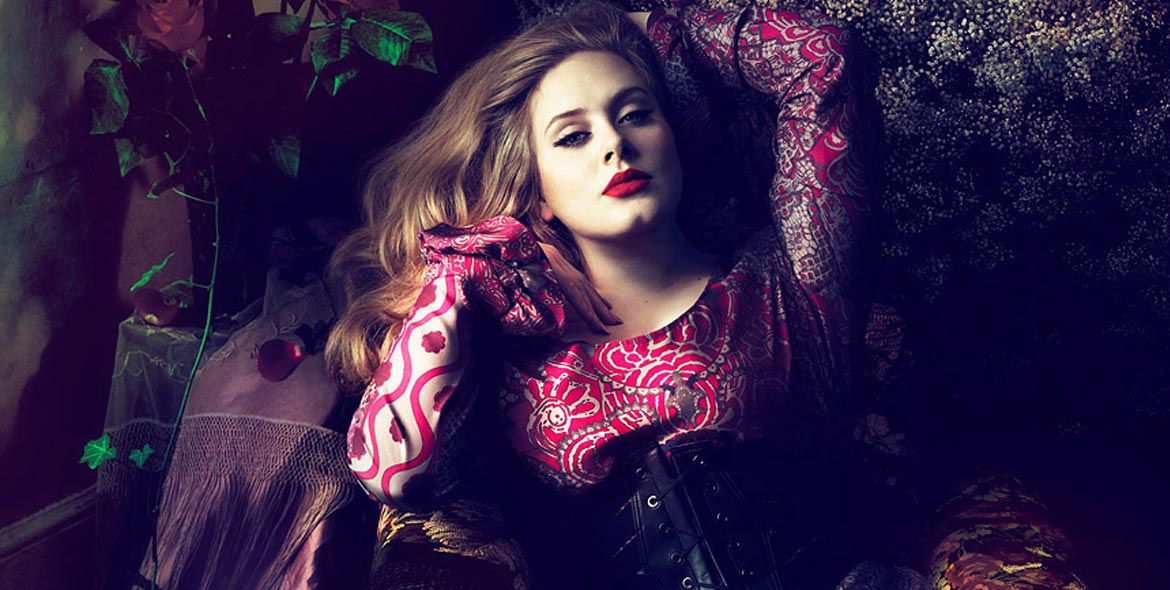 Adele is the pop music queen of the 2010s. She continually wins over our hearts with amazing performances and stunning fashion choices. She’s got the outfits, jokes, and audience interaction down pat. Adele’s dresses have grown particularly glamorous through the years. A wardrobe that started out full of simple black dresses for a young new pop star has grown to include eye-catching fashion forward pieces.  Let’s look back at some of her finest fashion choices to date.

At the 2016 Brit Awards, Adele’s dress was a flowing, sexy crimson dress. It was a beautiful gown, but even those graceful folds couldn’t prepare us for her second dress of the night. Midway through the ceremony, Adele changed into a glittery Valentino gown emblazoned with stars and a towering image of the Empire State Building. The Art Deco New York look was an interesting choice at a London ceremony, but damn did she look glorious.

She may have walked the red carpet in a sparkling black dress, but the lacy red gown she changed into to sing “All I Ask” was the real star that night. The lace interacted with the lights and shadows onstage to create a beautiful, haunting performance. How does one manage to be simple and ornate at the same time? Maybe it’s one of those skills you just inherit. The right dress doesn’t hurt, though.

Adele went out in classic black at the NRJ Music Awards in Cannes. Subtle but shining, she wore a silk jacquard Giorgio Armani cocktail dress and a sparkly, feathered top. The contrast of textures gave her typical dark palate look a bit of variety we hadn’t seen before. A black wardrobe can get boring fast if you don’t find ways to add variety and depth. Adele, or someone she pays, is doing their job well.

Looking back a few years to the 2012 Grammys puts us firmly in black dress territory. To sing “Rolling in the Deep,” Adele wore a floral-stitched black dress with a lace-inspired spotted top. The dress was gentle yet sophisticated. There’s a balance to be found between simplicity and boldness. With a voice like Adele’s, the more you can minimize distractions the better.

It’s not as simple as a cotton black dress, which is why it still made it on this list. This is early Adele fashion, still experimenting with straightforward easy designs. Adele’s dress is a collage of record-shaped circles stitched together with lace. There’s something floral hidden in the geometric shapes here, but on the dim-lit stage, we focus on Adele. Her long golden hair (she had longer hair back then) and emotive face stand out against the black. The privilege any good singer should have onstage.