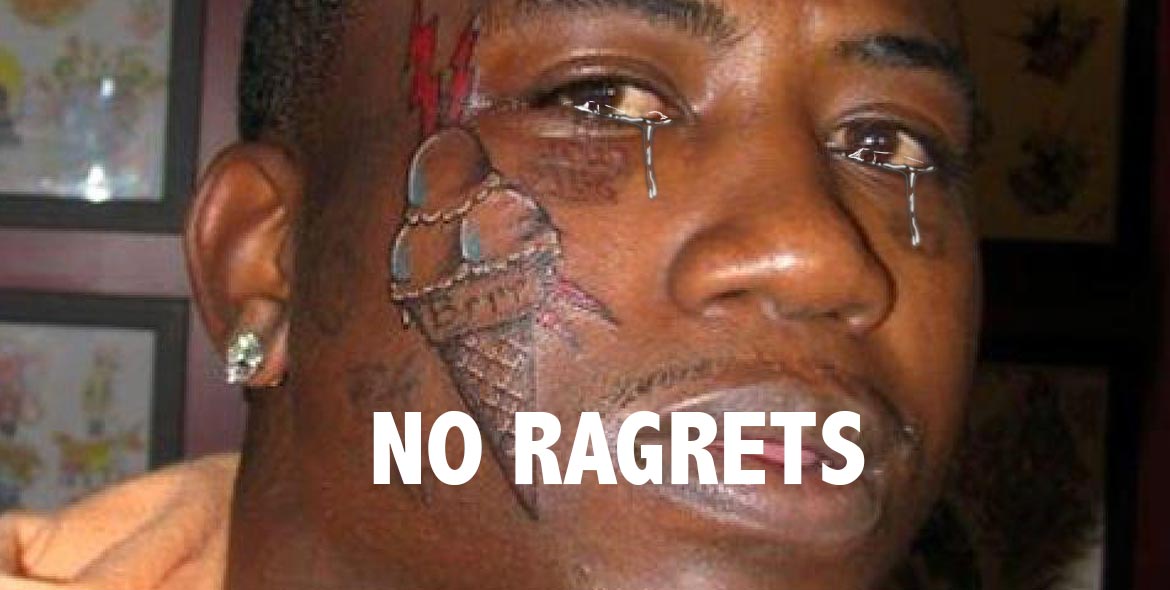 Tattoos are the permanent fashion statements that truly define how tacky a celebrity is. Some are tasteful and artistic. Others are poorly executed physically – and mentally. It’s easy for someone’s ultimate accessory to become their worst offering. Think about how many celebrity’s names have wound up on each other’s body’s in bold testaments of their longevity together. Le sigh. Horrible move, people. That’s tattoo rules 101. We know they can afford the removal, but we can mock them anyway. Without further ado, this is Richard Magazine’s list of the absolute worst celebrity tattoos.

Oh, the 90s. You gifted us the Baywatch babe, Pam Anderson, but also influenced her to get this horrible piece of celebrity tattoo history. Barbed wire around your bicep, Pam? Really? Tommy Lee’s influence must have gone to her head. Good thing they parted ways before she inked up the rest of her body.

Okay so, Megan, let’s talk this out. You’re one of the current bombshells of Hollywood. Why are you getting a former bombshell tattooed on your forearm? Your ode to Marilyn Monroe is felt in your daily existence. Do you think we don’t get what you’re going for? Ugh. Tacky.

We seriously love her acting. We just as seriously hate her tattoos. Asian, the lion from the Chronicles of Narnia sits perched on her shoulder blade awkwardly. It’s poorly drawn and unimpressive. A bouquet of snow peas sits on her lower back. The ink is fading and it’s bizarrely placed. Why you ask? We’re wondering that, too.

It’s a white dot on her middle finger. I. Don’t. Know. Why. If you’re going to do it, do it. This is a very lame duck way to go about getting a tat. Another typical let down from Kendall.

Where to begin? Miley is tatted all over. She has one of Saturn on her arm. She has one weird little line thingy that she got with Chris Hemsworth’s wife on her back. She has aliens and other space related things on adorned on her fingers. There is one of her late puffer fish, which is honestly cute, but it’s lost amongst the random patches of ink spread across her body. Much like the star herself, Miley’s tattoos are all over the place, conceptually and physically.

You saw this coming. You’d also see one of the most popular, worst celebrity tattoos coming from mile away if Tyson was scrolling down the street towards you. How does anyone have a conversation with this former heavyweight champ and keep it together? Oh yea, because his punch will rearrange your face. Got it. But hey, it would still look better than this.

Getting Roseanne tattooed on your chest sounds like an epic, late night drunk challenge. Well, Mr. Arnold embraced that challenge. Of course, he was married to Roseanne and worked with her for a long time. But still, Tom. Really?

Back to the face tattoos. Lil Wayne has like 10. That’s 10 more than anyone should have.

Spelling is important. It’s important at Richard Magazine. It’s important in your 3rd grade English class. It should be especially important when you get a tattoo. Well, Hayden Panettiere needed a spell checker for her Italian tat that reads, “To live without regrets.” We’ll save you the translation time here. The word “live” is misspelt. I wonder if she ragrets it?

Okay, yea, so back to the face tattoos again. Soulja Boy has several, including the Gucci logo. You ain’t Gucci, bro. You’re straight trippin’.

Speaking of Gucci and face tattoos, here’s Gucci Mane, who apparently loves ice cream. His love extends so far that he got it permanently inked onto his face. Mind you, this tattoo came shortly after being released from a mental hospital. I’m not saying the two are directly related, I’m just stating the facts.

And another face tattoo. The Game is proud of his hometown, LA. So proud he wears it on his face.

Divorce seems surprising easy when it’s up against getting a tattoo removed. Her Billy Bob tat wasn’t only a bad idea; it looked horrible off the bat. Like what is that thing? Is that a dragon? Or a snowman unicorn combination? I think we’ll call it, regret.

What’s the important lesson here boys and girls? Completely evaluate the permanent decisions you make for your body before walking into a tattoo parlor. Richard Magazine is fully available for free tattoo advice. Leave yours in the comments below. Oh, and please share this to your friends to prevent similar mishaps. Together we can end bad tattoos.