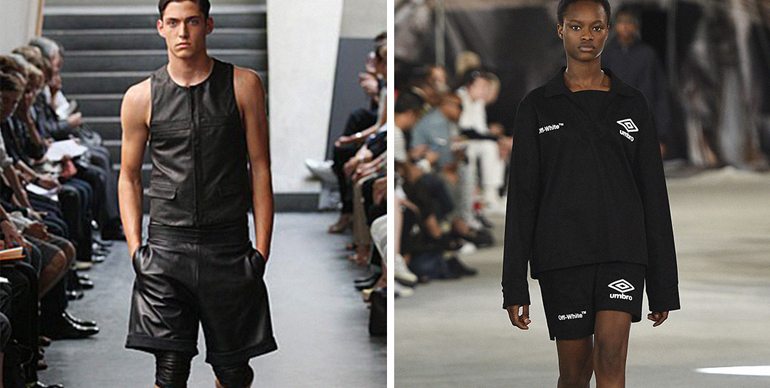 A few seasons after the 90s renaissance debuted with a bang at New York Fashion Week, style experts are saying the 00s are back. This fall, they’re predicting an influx of yesterday’s best sartorial looks and runways exploring the merits of that fateful decade that marked the beginning of the 21st century. I know. It feels too early to turn the aughts into a vintage fashion mine, but the critics have spoken. Time to take in the prediction and start thinking back to all those outfits you thought were super cool 10 years ago. If you’re lucky, some of them may still be sitting in the back of your wardrobe waiting for such a time as this. What will designers deem worthy of a fashionable revival? Here’s a little guess.

Given the success of athleisure in the 2010s, velour could easily become one of the staple pieces in fashion when the 00s are back. In fact, gals like Kylie Jenner and Rihanna are already starting to work imitation velour tracksuits into their celebrity wardrobes.Despite their reputation as famewhore diva wear, these outfits were incredibly comfortable. However, it was this excessive Hollywood use that led to the outfit’s demise. If the velour tracksuit is poised to return, it will need to be more accessible than it was in the 00s. A suit accessorized with an iced latte and itty bitty toy pup isn’t going to cut it anymore. In the age of customization and personalized fashion, everyone will want in on the comfy charms of jewel-studded athletic wear.

As cringe-worthy as it sounds, the bucket hat really might be in for a comeback. We’re already seeing fashion greats like Rihanna incorporating this unfortunate fad into their streetwear fashion. Try to look on the bright side. Maybe fashion designers learned their lesson and will improve upon this epic 00s fail. If you leave khaki and jean hats out of the equation, this piece of aught fashion is surprisingly functional. It’s spacious, so you can show off your curls better and still keep all but the tips dry in a downpour. It’s probably a better choice for ladies than men. Steer clear of those rough-hewn designs country boys wear to fish and you’ll be alright when the ’00 are back.

It was the streetwear accessory for any downtown 20-something in the early aughts. Boasting a huge dose of unfiltered Americana, the cap became an unexpected high-end hit thanks to casual guys like Pharrell and Ashton Kutcher. Now, it’s back with new purpose. You can blame Donald Trump’s loud red hat during last year’s election, but the real culprits here are tech-savvy models like Gigi Hadid who reintroduced the style. It seems for every wild pink hairdo, there’s going to be a stark Von Dutch. Look around you, though. Maybe the trend never really left.

Last year, there was a whole to-do when an English fashion publication declared the end of cleavage. Whether that’s a true statement about women or not, it won’t be for men when the 00s are back. It would be near impossible for the fashion world to welcome back the aughts without re-introducing the luxury V-neck t-shirt. It’s a shame, really. Designers were just starting to embrace the crewneck as a superior alternative. All we can do now is wait out exposed pecs all over again and hope the deep V-neck stays out of the picture.

Socks are great, but they have a way of forcing themselves into outfits where they don’t belong. The first instance of this you might recall was the socks and sandals fiasco of the late 90s. Luckily, that one’s locked away for now. The sock trend you’ll be re-visiting when the 00s are back is athletic shorts and tube socks. Popularized by big names like Prada and Vivienne Westwood, this is another aughts look that probably contributed to current athleisure fashion. In many ways, it’s the least practical of all the looks on this list. Why would you try to keep wear long socks while you’re working up a sweat? However, if mixing sexy brogues and tall socks with your jogging shorts is your thing, great. Please go right ahead.

Regardless of how you feel about it, the 00s are back in play. Might as well enjoy the nostalgia while it lasts. Before you know it, you’ll be shopping for re-invented styles from the 2010s.