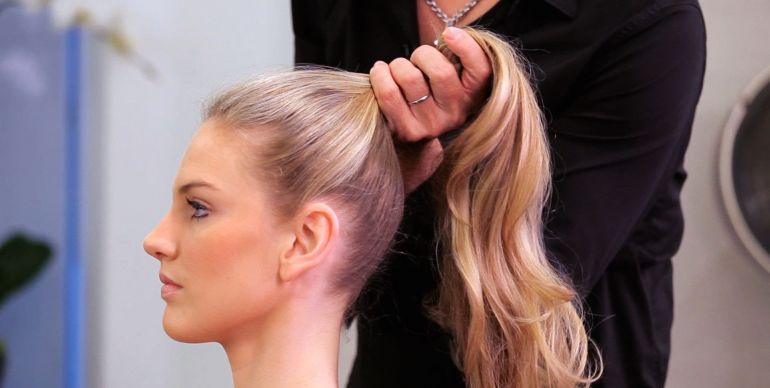 Your hairstyle should be intentional. It might have been cool in the 90s to pull back your hair into some simple ponytail, but that era of casual fashion is over. Unless you’re still chipping away at this spring’s athleisure trend, the time has come to research how to style your ponytail so it doesn’t look thrown together. Lucky for you, a lot of people have been experimenting with different styles since the late 2000s. Like any emerging trend, there have been beautiful triumphs and horrible disasters, but we’re far enough removed from the early days of ponytail style to have a whole slew of tried-and-true looks to take inspiration from. Don’t settle for the simple pull-back this summer. Take your flowing tresses and make something sexy out of them. Your hair deserves the attention and so do you.

Any great look incorporates some sort of juxtaposition into its design. This look does it to the extreme. The contrast between that sleek, shiny top and airy, voluminous tie-back is glamorous and freeing. If you have bouncy curls that just won’t sit still, give them the low and full treatment. It might take a little gel to get them to behave at the top, but it will be product well worth it.

Let’s be honest. What you see here is basically a braid interrupted. It groups your hair together delicately to evoke princess braiding without the hassle of sitting through a whole crafting session. To style this look right, tie your hair at the base of your neck or even lower. Just be intentional. You don’t want your tie to look random or unconvincing.

If you want to keep things simple, try tying your hair back with a simple elastic band and draping it effortlessly over one shoulder. It’s been a cute choice for years and few can argue with its charm and easy execution. For formal events and leisurely outings, this is the way to go. Why get all complicated if something simple works equally well?

Simple though it may be, sporting one straight ponytail down your back is a totally acceptable hairstyle choice. How you style your ponytail doesn’t need to be elaborate or unconventional. The key to this look is minimalism. Really let your natural hair fall simply down your neck and back in one straight line. No frills or adornments necessary.

DO THOSE FRENCH TWISTS

At first glance, this subtle way to style your ponytail doesn’t seem any different from the classic short ponytail. Upon closer inspection, you’ll see the classy additions. French twists are basically just two pigtails carefully woven together and tied together so they flow down your back like one ponytail. It’s an easy look to create while still packing a dramatic design punch.

CLUMP IT INTO BUNCHES

Bubble ponytails are far simpler than they look. Thread your hair through multiple hair ties and pull those tresses through in clumps so they billow out in between each pair of ties. It’s a playful styling choice that allows people with straight hair to tease out some curly styling without committing to a tedious curler.

Pull this off and your ponytail will be the talk of the town. Separate your hair into three parts 0 one at the crown, one in the middle, and one at the base of your head. Gather your top section into a ponytail, secure it with an elastic band, and wrap a sliver of hair around it to hold the tie in place. Then, gather the middle section and combine it with the above ponytail for an integrated look that will have you looking like a queen.

When discussing the possibilities of the ponytail, this famous look must be on the list. If you have long hair you want to show off in style this is the way to go. Let it fall across your back like a veil and pull the rest of your hair down tight.

Clearly, how you style your ponytail should be an important part of your overall look. This isn’t just some easy way to get hair out of your face. Make the summer of 2017 the season you finally get serious about ponytail beauty.