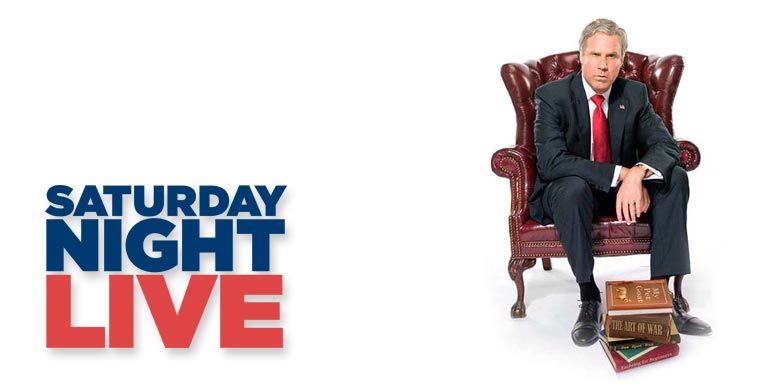 Since the 70s, the best SNL Presidential impressions have endeavored to keep us sane during election season. They have carried us through every terrible decision our leaders have made with some of the best political impressions ever put on the silver screen. In the insanity of these last few months, Saturday Night Live has been especially comforting. How would we have survived this year without the Donald Trump impersonations of Alec Baldwin? Kate McKinnon’s Hilary Clinton impersonations on SNL political skits even earned her an Emmy! As the campaign drudgery of this election season draws to a close, let’s look back on the SNL presidents list and remember some of the best political impressions the collective SNL cast have graced us with.

WILL FERRELL AS GEORGE W. BUSH

With a beautiful mastery of the naïve, entitled drawl that was the core of Dubya speech, Ferrell gave us all laughs as the world around us collapsed. This SNL presidential impressions was some great comedic “strategery” in the part of Saturday Night Live. Whether discussing “the global warmings” or playing Frisbee golf with Condoleeza Rice, Ferrell’s Bush was just as annoying as the real guy while managing to infuse something sweet to soften up the real-life tension.

It isn’t easy to create one of the best political impressions while the President is mid-scandal, but Hammond made it look like child’s play. His Clinton was hilarious and accurate, playing on the sleaziness and suspicion generated by the Lewinsky affair while maintaining an air of respect. His SNL political skits felt more like ironic tributes than personal attacks at a time when personal life was invading politics like the plague. It’s an impressive feat, to say the least.

Sometimes, politicians can be boring. Believe it or not, there was a time when Presidents didn’t do much and the media didn’t create things they had done. This was the case with the first Bush, and it’s what made Carvey’s impressions famous. He got the idea of Bush and blew it up to excellent comedic effect. He did it so well Bush Sr. praised him for it and borrowed his “not gonna do it” catchphrase. I guess funny beats boring.

The best SNL Presidential impressions are remembered for their ridiculous attention to subtle ticks and details. When you have a woman like Palin to imitate, you could go crazy trying to focus on just the right quirks. Fey navigated the wealth of material available to her during the 2008 election and ultimately ended up doing as much to cement Palin as a political lightning rod as Palin herself. Can you see Russia from your house?

It wasn’t the best Presidential impersonation by any means. Every skit was Saturday Night Live putting Chase on the set and tricking the watching public into believing he was playing Ford. He was really just playing himself. I put this impersonation on the list because, somehow, it’s audacity worked. With one of the greatest SNL cast members at the helm, it didn’t matter that this Ford bore no resemblance to the man actually occupying the White House.

I loved Amy Poehler’s Hilary Clinton impersonations in 2008, but McKinnon has mastered the New Clinton. While Poehler was mostly creating a stiff, fury-driven woman who had lost one too many times, McKinnon embraces the Tracy Flick aspect of Hilary and allows her to let loose in SNL political skits. Suddenly, before our eyes, a Hilary Clinton impersonation that is humanizing! It can’t have been easy, but it was effective.

Anyone in the SNL cast can do a southern accent. Do you really need anything more to do a Carter impression? Aykroyd’s portrayal was most notable for being the first genuine impression of a president on Saturday Night Live. Before his Carter, the only presidential impersonations SNL had produced was Chevy Chase as Chevy Chase disguised as Ford. It may not have been the most accurate of political impressions, but at least it was something actual for the SNL presidents list.

Out of all SNL presidential impressions, Reagan was the most impersonated President of the sketch show’s history due to its tumultuous turnovers in the 80s. During the Reagan era, the SNL cast was changing constantly, meaning many comedians got a chance to play their spin on The Great Communicator. Playing on public suspicions, Hartman’s Reagan was a likable old man in public and a vicious delegator in private. It was one of the most sharply opinionated impersonations in SNL history.

Romney was a hard one to pin down. His peaceful exterior hid something profoundly sad. Sad doesn’t translate too well to comedy, but Sudeikis found something beneath the façade that was almost everyman and pleasantly humorous. It was something out of a Chekhov play with robotic repression and some tragic, frustrated untapped potential. What would a Presidential hopeful be without that?