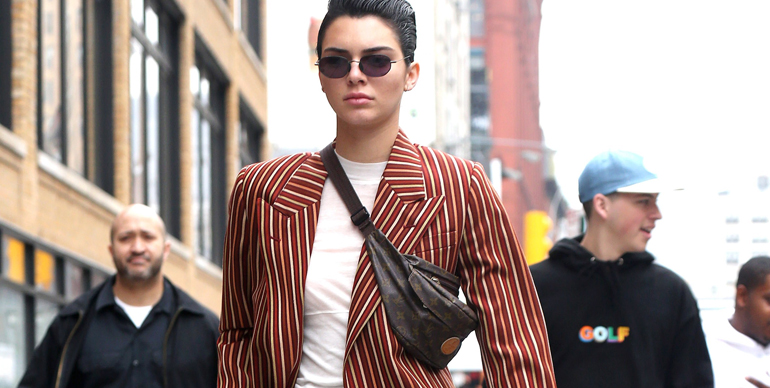 Kendall Jenner is finally coming of age. After those early years strutting down Victoria’s Secret’s runway and Instagramming for millennial fashionistas, the young star is turning her attention to a new niche fashion trend. You may not believe it until you see it, but according to this social media model, the time has come for you to start wearing shorts with your office blazer. That’s right. Call it feminism, athleisure, or simply the end of an era where shorts were only for teenagers. The one thing you can’t do is ignore that warm weather fashion has taken a turn for the sartorial and powerfully professional. It gets even better. You don’t need a luxury budget to nab an outfit like this. If the right sales are in place, a trendy tailored shorts suit will only cost you about $200. Who wouldn’t jump at the chance to dress like Kendall Jenner for under $500?

It’s the most unimpressive part of this outfit, mostly because you’ve seen plenty of blazer’s like it before. A light summer jacket from the folks at Reiss, it’s checkered pattern is nearly identical to the one Jenner wore in Paris. Classic as a blazer can be, you’ll find many occasions to wear this professional second layer. It’s well worth the $80 price tag.

At a first glance, these pleated shorts look like a skirt. They have the spacious hems and slightly ruffled texture of a traditional tailored office skirt. Yet, look a little closer and you’ll see they really are a pair of trousers designed to bridge the gap between classic womenswear and casual fashion. It’s refreshing to see the pantsuit taking on new forms. Plus, you get to keep cool while rocking an appropriately professional outfit. How often does that happen?

When wrapped fabric and t-shirts become one, you get this decorative top. It feels very athleisure and you could almost get away with wearing it to the gym or the office equally, though obviously not in the same day. We love how it cheekily showcases your navel while keeping things classy and contained. Casual Fridays, anyone?

Just in case the 90s renaissance and athletic-inspired semi-formal attire aren’t pronounced enough in this outfit already, Kendall Jenner slipped on some glistening white platform sneakers to finish things off. You can do the same, especially if your office life is decently laid back. If not, flats will do you just as proud.

Wondering what this full ensemble will look like put together? Here’s Jenner herself to give you a sneak peek. Notice the adept fashionista added her own flourishes to the outfit, sporting trendy sunglasses and classic Gilded Age suspenders. Just goes to show that even a precise look can be tweaked to add some personal touch.

Shorts are back in the spotlight with a positive slant that hasn’t been seen since the 1960s. Whether you wear the look to work or for a casual weekend outing, it’s time to get your warm weather trouser game on. Kendall Jenner says so.