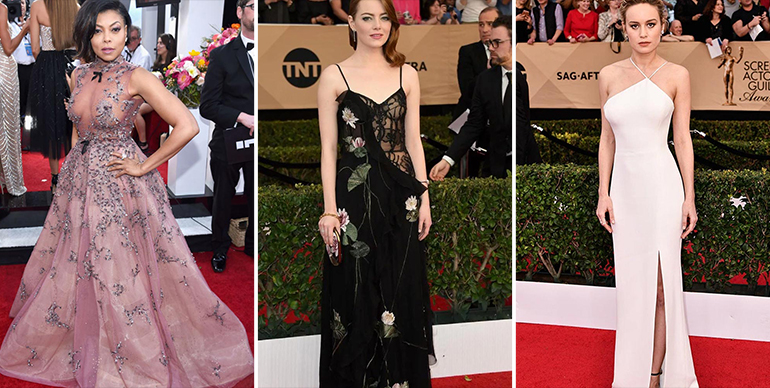 SAG red carpet fashion isn’t big like the Oscars or the Globes, but it should be. The 2017 Screen Actors Guild Awards were stylish, political, and at times downright hilarious. Did you see Winona Ryder’s face when Stranger Things won the top television award? If not, go find some GIFs. I think the woman made at least 30 faces while the show’s producers accepted the award. Along with all its funny moments, the SAGs also had a magnificent red carpet. There were performers who redeemed themselves after an embarrassing outing at the Golden Globes earlier this month and stars who wowed us once again with new outfits. Here are the best, and a few of the worst, looks from last night’s SAG ceremony. Ogle, envy, and enjoy!

Manning was almost not a disaster. Honestly, it was the hair that earned the title of “worst dressed.” The maroon gown worked for her apart from the candy-floss-tinted locks. She just really needed something nice and neutral to help her hair not look out of place. It was a little too much style mixing for red carpet fashion.

The hottest red carpet looks from the 2017 SAG Awards were traditional red carpet dresses with a twist. Sometimes, the twist was good and other times it went too far or not far enough. Will the worst-dressed Hollywood stars redeem themselves with better red carpet dresses at the Oscars? I guess we’ll have to hope for the best and watch for ourselves.