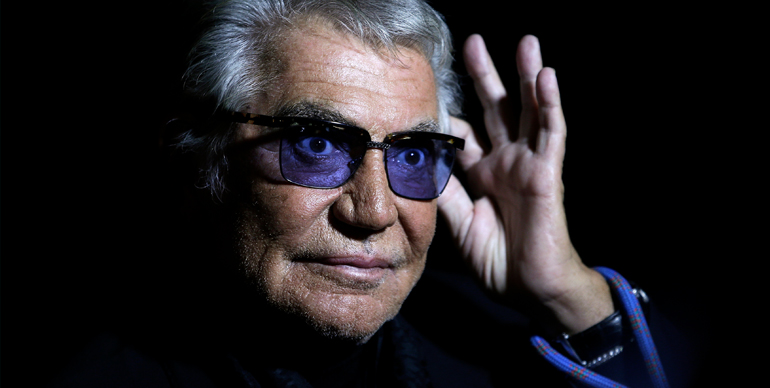 Roberto Cavalli is a king of luxury lifestyles. He is known across the globe for glamorous, tasteful excess. Starting with printed leather gowns in the 70s, he has gone on to craft some of the most exotic fashion lines and home interior products the world has seen in a long time. He is a technological genius as well. To help him continue to the next level with his designs, Cavalli made cutting-edge developments to modern textile technology. These tweaks supported his increasingly complex work with leather and prints. As with many fashion designers these days, he is also a favorite with the ladies. His seductive cuts have showcased the figures of everyone from J-Lo to Victorian Beckham on red carpets in dozens of different countries. Who is the man behind this myth shrouded in his exotic designs? Here’s a little more about how Roberto Cavalli became his legendary self.

As a boy in 1940s Florence, young Roberto was exposed to art and design at a very young age. His grandfather was a celebrated Impressionist painter and his mother a talented seamstress. Between these two role models, the boy grew up fascinated by the process of creation.

FROM ARTIST TO DESIGNER

Inspired by his artistic grandfather, Roberto went to study at the Academy of Art in 1957. It was here that he chose to part ways with his original dream and apply his painterly techniques to textiles. It was a quick, passionate decision which would change his life forever.

Cavalli’s journey from textiles to fashion took him roughly 13 years, but when the time came for his 1970 debut he was confident. Boasting a new leather printing technique all his own, Roberto displayed everything from gloves to evening gowns at his initial show. Within days he had been proposed commissions from big names Hermès, Pierre Cardin, and more.

When it came to building his first boutique, Cavalli strategically placed it in the old fishing village of Saint-Tropez. He held his ground against the skeptics maintaining that the coastal town would prove to be a desirable destination for many of fashion’s elite. Lucky for Cavalli and his wares, his prediction spot on.

When the 80s brought minimalism and deconstructive fashions to the forefront, Cavalli’s business grew quite for a while. It allowed him to focus on family life and re-evaluate the relevance of his former work to a new decade. Follow this minor lull in popularity, Roberto came out right back on top at the dawn of the 90s with printed jeans and stretched jeans. By 1995, he had diversified the denim market drastically.

Riding the wave of his revived popularity, Cavalli soared to new heights in 2004 with an exhibition at the Metropolitan Museum of Art. Through a collection of animal skins and animal references in historical clothing, he curated a discussion on our human fascination with natural patterns. This lead to Cavalli revamping the classic Playboy bunny costume and designing a snakeskin-covered bottle. It was this fusion of the natural and luxury worlds that garnered the designer his current reputation as an elite lifestyle specialist.

His name solidified in haute couture and interior design lore, Cavalli was back in high demand. After his exhibition launched, he designed for companies and stars from Christina Aguilera to H&M. He also began to take a more active interest in luxury furnishings, crafting tables and chairs that imitated his fashionable animal prints.

Today, Roberto Cavalli is 71 years old and reluctant to retire. He’s turned his career in so many different directions, he doesn’t want to miss his next big idea. With energy in his veins and passion to spare, you can bet we’ll see plenty more of this unique Italian designer before he signs off for good.