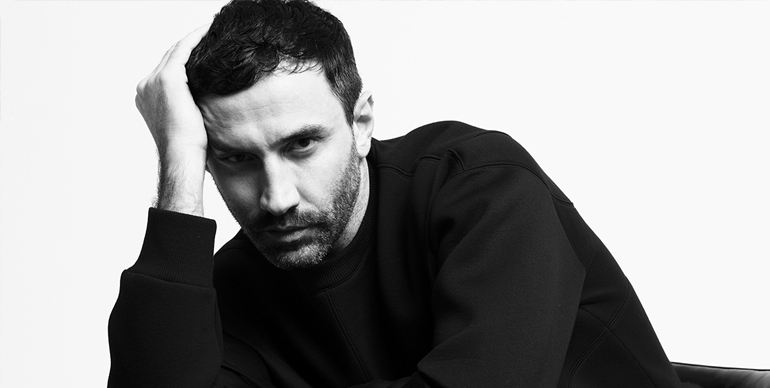 For 12 incredible years, Riccardo Tisci re-invented Givenchy. He introduced a new energy to the company, passion inspired by the club scene and tinged with sexual provocation. His smart imagination thought up some of the finest fashion looks of the 21st century. Under Tisci, the brand was always pushing boundaries. A glance at past runways shows his bold use of sexy, unusual ideas and partnerships with dozens of impressive collaborators. His designs have been described as iconic, shocking, original, and surprisingly moving. Now, Tisci is moving on to different pastures. The fashion designer left Givenchy on January 31st for ‘something new.’ Though the split was amicable, there’s little doubt he will be sorely missed. As we await his next big thing, here are some of his finest moments as Givenchy’s head designer.

At the 2009 Oscars, Tisci did this Avatar cast member proud. Saldana’s magnificent lavender gown from Givenchy’s spring show fades from navy indigo up to a glistening strapless top. Structurally, it’s stunning. The use of color was particularly unique. Tisci manipulated the color purple until it no longer felt regal. Instead, the dress has a calming, sexy appearance to it. Some compared it to Maine, the color of lilacs and the image of waves crashing against a shore. Whatever image it conjured in your mind’s eye, the gown was the red carpet triumph of that year’s Oscars.

The translucent tuxedo shirts weren’t the primary talking point in this 2010 ad. That was Lea T. The Brazilian transgender model started her fashion career as Tisci’s assistant. When the emerging model was looking for her first big shoot, Tisci said he’d give her a shot. Thus, this ad. In 2010, featuring a transgender model in a mainstream ad campaign was a big risk. Luckily, the gamble succeeded. Lea T. went on to become Redken’s first trans spokesmodel and feature on eight fashion covers, including Elle Brasil.

At the 2011 Grammy Awards, Tisci dressed singer Florence Welch in a stunning Japanese-inspired gown. The base was a thin mesh material with silken swan cut-outs applied to the bodice, torso, and thighs. Further down the dress, the swans stretched out their wings to form a feathery pattern that stretched the full length of the gown. On the back, a small spot of orange feathered detail complemented the ivory swan appliqué. This ivory-orange mixture blended perfectly with Welch’s orangey-auburn hair. To the admirers of ’11, this dress was proof of Tisci’s ability to take established techniques and transform them into something fresh.

By Givenchy’s 2012 show, Tisci was ready for a new challenge. One of his ideas was this ruffled blazer. The tailored jacket looks crafted and chaotic at the same time. There’s something beautifully natural about the way it curves into a finessed ‘V’ in the front. The shape stands out in combination with the straight contours of the model’s arms and legs. It’s a lesson in how to make a monochromatic outfit interesting. Create outlines and shadows that interrupt the solid color. This gives light the power to change how an outfit looks. Another Tisci masterclass in how to use what you have wisely.

A revolutionary of sorts, Tisci tried his hand at iconoclasm with his iconic Bambi print. The image is of Disney’s innocent fawn paired absurdly and violently with a sensual photo of bare female thighs. What does it mean? Most critics say it represents the loss of childhood innocence. Whatever the meaning, the print became the most ubiquitous must-haves of 2013 street style. You can also thank Tisci for making Disney characters chic again.

In 2015, the theme of the Met Gala ball was China: Through the Looking Glass. Always ready to shock and impress, Tisci designed Beyoncé a sheer gown for the occasion. It was so sheer, it left practically everything exposed. Only strategically placed gem and crystal embellishments kept the singer from waltzing into the gala nude. It was an eye-opening red carpet surprise. While the Queen B was very exposed, her long glistening train was a very conventional design. Fashion critics discussed it for weeks. Once again, Tisci succeeded in shocking but not offending. It felt a little like some sly homage to The Emperor’s New Clothes.

Pat McGrath and Tisci have been partners in crime for over 7 years. The designers have crafted some of most outrageous runway makeup of all time together. In 2014, the pair had Givenchy’s models walk in bejeweled masks. Their entire faces were covered in jewels, recalling the burial coverings of the ancient Middle East. In 2016, the designers went for a more ethereal aesthetic, like a Lord of the Rings elf. Tisci and McGrath’s collaboration is one of the most enduring legacies on this list. Tisci’s clothes will be remembered, but masked faces on a runway were something entirely new. They are the truly original legacy of Tisci. Hopefully, this partnership will continue when Tisci returns to the runway.

These are just a few of Tisci’s triumphant moments while working with Givenchy. The man has crafted hundreds of pieces, 92 collections, and dozens of unprecedented runway looks. Givenchy and Tisci will sit out the March show as they begin new, separate collaborations, but both will be back for the fall. There’s plenty of stunning looks to reminisce over until then.