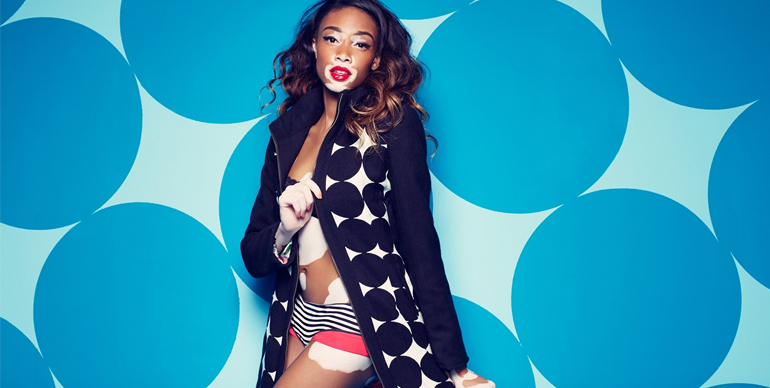 The world of runway fashion has never been a particularly inclusive one. Based around the conventionally lithe woman and rough-hewn masculine man, it has a reputation of taking convention to the extreme. Obviously, most casting directors who scout talent for high-end catwalks have very specific parameters about weight, height, and subjective traits like facial features, skin color, age, and gender. In the past, all these rules have contributed to the inaccessible and mythological nature of fashion shows and fashion shoots. Only the elite got in and elitism was partly defined by how “beautiful” you were. Luckily, the world is slowly changing for the better. Social platforms like Instagram and Twitter give revolutionary models the chance to stand up for themselves and break open the bubble that has been runway fashion for so many years. Here are a few of the brave faces challenging how we see commercial beauty.

So honoured and proud to officially be part of the @Nike family! My dreams are coming true! Sneak peek of my #Vapormax campaign coming 4.27 to a billboard near you #KissMyAirs 💚🖤

A 22-year-old activist from Canada, Harlow was first discovered by Tyra Banks via Instagram. Selected for her unique poise and bold confidence, she became one of the top finalists on America’s Next Top Model in 2014 and started her professional career as a model after the show ended. Harlow suffers from vitiligo, a skin condition that causes the skin cells to lose pigment and color. The condition flies in the face of runway fashion’s guidelines defining “conventional” beauty, but this hasn’t stopped Winnie. Since her impressive turn on television, she’s posed for Desigual, Diesel, Swarovski, and H&M. Models all over the world look up to the work she’s doing. Check out her Instagram to learn more about inclusivity in the fashion world.

Actor Deshun is 81 and hot as ever. A respected actor in China, he landed his first gig as a runway model thanks to his daughter’s smartphone. She was the composer for designer Hu Sheguang’s show. When Sheguang saw Wang’s physique and wavy white hair, he was hooked. It’s easy to forget that fashion tends to be an ageist industry. Granted, most brands are geared toward a younger audience, but that doesn’t make older people any less worthy of runway status. Wang represents a fresh face not often seen in the inclusive fashion world. Even though he’s more youthful-looking than most men his age, Wang hopes he can foster change. Hopefully, his popularity in Beijing will encourage more designers to include older revolutionary models in their runway line-ups.

The second model with Down Syndrome ever to grace the stage at New York Fashion Week, Madeline is all about making a difference. Her resume is quite impressive. Never one to settle for the easy dream, Stuart has taken on a new challenge since her modeling debut in 2014. This year, she launched her own fashion label as a part of the FTL Moda runway in New York City. Vocal on social media and in interviews about her beliefs, Madeline hopes her success in the fashion industry will inspire others with disabilities to persevere and fulfill their life goals.

Transgender models have been gaining ground in recent years. This year has already featured the first trans model on the Lakme Fashion week catwalk and French Vogue’s first trans cover photo. However, all these gains wouldn’t have been possible without Pejic, the first transgender supermodel to make it in the runway world. Her work has been featured in the United States, France, and her native Australia since she was 16. In 2015, Make Up For Ever named made her the first trans woman ever to be the face of a cosmetics brand. It’s revolutionary models like Pejic who move the fashion world forward by insisting on making careers of firsts.

Revolutionary models can come from anywhere and the current names in inclusive runway fashion bear witness to that. Keep your eyes open for the next star to challenge conventional beauty standards and make fashion and beauty a more relatable industry for the rest of us.