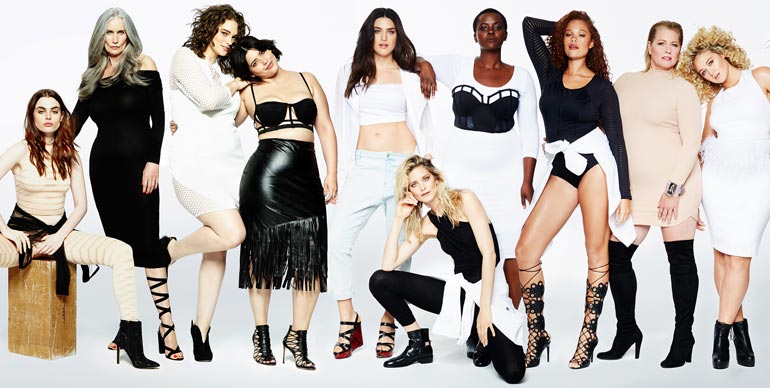 For a while now, there has been ramping pressure in the modeling industry to be more inclusive to “plus size models.” Painful as it is, time after time, we continue to watch the fashion industry objectify female body image. It’s unfortunate how high-end fashion has created such brutal standards for the average model. Hell, they’re even calling Cara Delevingne too big.

The people in modeling considered as plus-sized models are still thinner than most average people who are in good shape. These unrealistic standards have strong opposition from within the fashion industry and without. Many an independent beauty blog has lamented the blow to female body image, but recently bigger companies like Refinery 29 have taken an active interest in advocating for diversity and inclusivity in the modeling world. A recent photoshoot showcasing these activists recently debuted at Refinery 29’s Every Body Beautiful symposium. I think this was the seminal fashion shoot of this year. It may not have showcased the best clothes, but it did show off the best people. That’s something special. Here are some some other reasons I thought this was the fashion shoot of 2016.

It is rare for a photoshoot in the fashion industry to team up with a provocative documentary filmmaker to work on a project. Documentarians usually have secrets they want to uncover that the fashion industry would prefer remained buried away. Not these ladies. The photographers and models featured in this shoot worked with Jenny McQuaile, the director of the upcoming documentary Straight/Curve.

It’s special when a fashion shoot can be as inclusive as this one was to body shapes of all sizes. The great thing was that this shoot featured average models alongside plus-sized models, acting out their philosophy in practice. Nobody was deemed inappropriate for the shoot. That’s pretty special stuff in an industry famous for insulting girls for not losing enough weight before runway day. I said it before, but this emphasis on the person is rare. It makes the runway so much more interesting. The Fairy Diary hosted a NYFW runway Richard Magazine covered back in September had the same approach and we loved it.

At the Emmys this year, Jimmy Kimmel pointed out that people making a point like to trumpet their agenda from the rafters. Many political and social activists seem to revel in the recognition of their efforts rather than the furtherance of their cause. While this fashion photoshoot could easily have sought fame for being inclusive, the creatives were nobler than most. This wasn’t a news gimmick. This was just another shoot. The models and photographers didn’t pine after the people who noticed them. They simply stood there and let the world discover what they wanted to say.

So often, modeling diversity is seen as simply including plus-sized models in new sizes in a typically average model show. After it’s first outing at Refinery 29’s Every Body Beautiful, it was clear this fashion photoshoot was about all varieties of diversity. Plus-sized models were included, but also models of all races and a wide variety of ages. It was a more thorough examination of female body image focused in one show than had ever been seen before.

These elements of Anastasia Garcia’s inclusive fashion photoshoot are why it stands out in my mind. The pieces may not be revolutionary, but the concept behind the exhibit is. Hopefully, we will see more concepts like this in the near future to help the current stage of the female body image in the industry.