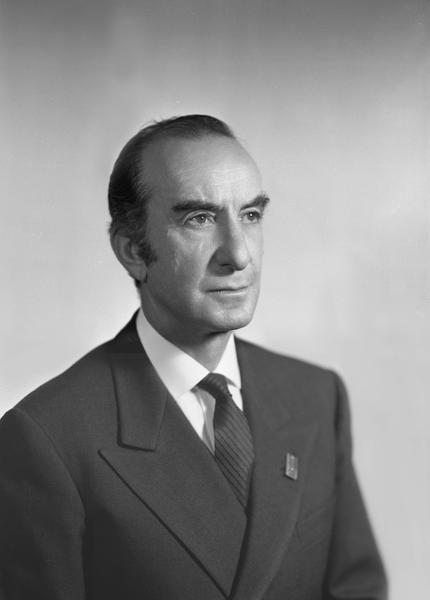 Italian Fashion designer Emilio Pucci was born in 1914 to one of Florence’s most respected families. He naturally embodied the jet set glamour of post-war Italy. He was multilingual, well-travelled, American-educated, air force pilot, Olympic skier and aristocrat. Recovering in Switzerland after the war, Pucci gave Italian and ski lessons in Zermatt. It was there that he designed a ski outfit for himself and socialite friends who were then photographed and published in Harper’s Bazaar USA, giving rise to a fashion phenomenon that exists to this day.

Setting up his atelier, Emilio began working closely with expert fabric manufacturers in Italy to pioneer and patent revolutionary stretch fabrics that abstained the heavy, rigid fabrications largely in circulation at that time. Contrary to his design, Emilio was driven by the desire to liberate women, granting them unprecedented freedom of movement. His stretch silk and cotton jerseys were weightless, unlined, and wrinkle-proof, precursors for a modern, travel-friendly wardrobe that captivated a new generation of modern, active women.

His designs featured sensual, free-flowing lines that followed the natural curves of the body, effortlessly elegant clothing which took women from day to evening and from jets to cocktail parties, perfectly complementing the lifestyle of the jet setters.

It was during the ‘50s that he began developing his signature prints: graphic, abstract designs inspired by the world around him such as Sicilian mosaics, heraldic banners, Bali Batiks, and African motifs. It was the first time that such geometric patterns had been incorporated into clothing and the effect was highly original. The international fashion press crowned him, “The Prince of Prints”. As a colorist he drew inspiration primarily from the natural landscapes of the Mediterranean, but also from the exotic locales to which he travelled. The result was a sophisticated fusion of color which became the trademark of his designs. Instantly recognizable, Pucci’s glorious and joyful combinations exude energy and emotion and allow the designs of the clothes themselves to remain relatively simple.

Emilio’s daughter, Laudomia Pucci took over the company after her fathers passing in 1992. In April 2000, the Pucci family and LVMH had joined together, the French luxury group acquired 67% of the company while the family retained a vested interest. With the Group’s financial support and expertise the brand has soared on the international fashion stage.