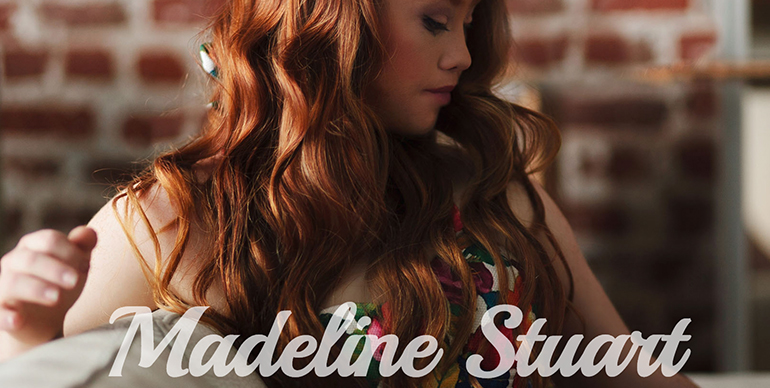 Madeline Stuart is a model with Down syndrome and she’s challenging everything you thought you knew about the fashion industry. Two years after her triumphant runway debut, Stuart made her second appearance at NYFW last week. This time, she was wearing tights from her own fashion line. Things weren’t always this encouraging for the Australian-born model. People ridiculed her for wanting to be a fashion designer. When she first started out as a professional model, people said a girl with Down syndrome would never make it in the fashion business. But now, at the ripe young age of 20, she is silencing her critics with success after success. Here is the story of how a passionate girl proved that dreams really can come true.

HOW IT ALL STARTED

Stuart’s modeling career began as a fitness challenge. In 2015, she started a new diet and workout regimen. After losing 44lbs with her new routine, she decided she wanted to pursue her childhood dream of becoming a model. Both Madeline and her mother knew it would be an uphill climb to break into the industry, but they went for it anyway. The 18-year-old started attending auditions. In just months, she had landed two jobs with reputable American fashion labels. Madeline Stuart the model was about to make her debut.

One of Stuart’s first clients was EverMaya. This popular bag company distributes woven handbags made from Huipil, an embroidered blouse worn by indigenous women in Guatemala. The company’s mission to support local artists and promote free trade made a great pair with Stuart’s message of inclusion. Her soft pale skin was also a perfect match for the brand’s vivid, textured handbags. “We are absolutely thrilled to work with a talent like Madeline on our newest national ad campaign,” EverMaya president Damian Graybelle told the press. “All of us at EverMaya feel very strongly about creating a brand that is rooted in a spirit of inclusion and providing opportunities for those who begin life with barriers to success.”

Manifesta was Stuart’s second client. When she was first starting out, Madeline released a set of stylish photos to promote her new career. Manifesta loved the pictures and asked her to join their team. Soon, she was the new face of the company. Manifesta’s credo is that every woman deserves to feel sexy and look amazing. Stuart works with them publicly and behind-the-scenes to make sure people with disabilities feel included in their broad mission statement. “Just as Madeline is committed to expanding people’s ideas of what a model can be, Manifesta is determined to show that the clothing and fashion industry doesn’t have to be exclusionary, that one brand can work for women of various sizes.” As her budding career took off, Stuart set her eyes on her next big goal. In the fall of 2015, she headed to New York.

Stuart’s NYFW debut was monumental. She opened for South African designer Hendrik Vermeulen on the FTL Moda runway. The event, co-sponsored by Model for Diversity, gave Madeline the chance to model two shimmering outfits from Vermeulen’s upcoming collection. First, she wore a far-out shirt and shorts combo paired with high, gold sandals. This off-the-shoulder cream gown was her second. Stuart’s gig at New York Fashion Week 2015  made her the second person Down syndrome ever to walk a NYFW catwalk. The first was American Horror Story actress Jamie Brewer who had walked for Carrie Hammer earlier that year.

Following her runway debut, Madeline Stuart featured in a bridal photoshoot modeling a series of boutique wedding gowns. The shoot took place at the famed Rixey Manor in Rixeyville, Virginia. Isadora Martin-Dye, co-owner of the venue, thought Madeline’s work gave the photos a healthy dose of relatability. “I think that being a bride is a life experience that every woman should be able to see herself doing, and definitely not stressing about the fact that they won’t look ‘perfect’ on their wedding day.” These classic shots are some of the most beautiful in Stuart’s portfolio so far. Madeline kept a low profile for the rest of 2016. She was busy preparing for her biggest NYFW debut yet.

At New York Fashion Week 2017, Stuart finally revealed what she had been working on. Last week, she walked out on the catwalk wearing sheer leggings and a detailed-cut tank-top from the first Madeline Stuart collection. With her hair dyed bright and done up in a fun, chaotic mop, she became the first fashion designer with Down syndrome to debut a collection at NYFW. The crowd loved her playful sneakers and brightly-colored tops. The show was celebratory and joyous, a rare atmosphere at this year’s typically somber fashion week. The new fashion line, 21 Reasons Why, takes its name from Madeline herself. She’ll turn 21 later this year. With an incredible career and new fashion line already under her belt, who knows what she’ll achieve next!

She may be a pioneer and revolutionary, but Madeline Stuart keeps a level head about her successes. So does her supportive mother. “I want people to stop saying ‘I’m sorry’ when I tell them my daughter has Down syndrome, because it’s a very naïve statement,” she says. “I think it is time people realized that people with Down syndrome can be sexy and beautiful.” I couldn’t agree more. Thank goodness we have people like the Stuarts to remind us of such powerful perspectives.