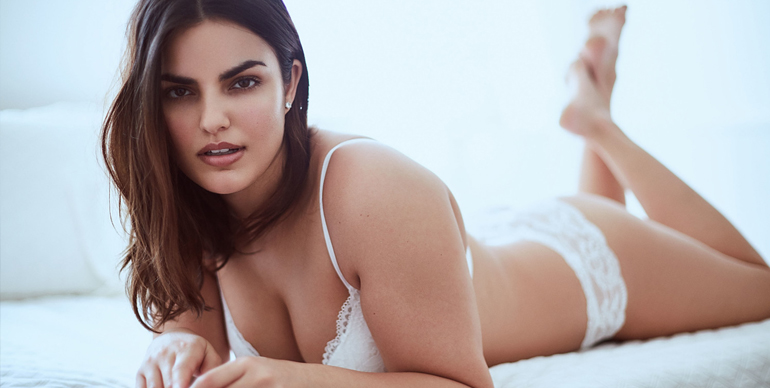 Weight gain has a bad reputation. It’s rarely seen as an improvement when someone puts on extra pounds these days. Yet, not too long ago, the exact opposite was true.  Slimming down until your ribs were visible and you hardly looked like an everyday person was a sign of illness or malnutrition. People knew it wasn’t healthy to be extremely plump, but a hefty build wasn’t something to be ashamed of like it is in the fashion world today. Bulky meant you were nourished and strong. It was a positive. Recently, these realistic beliefs about weight and body image came to the forefront thanks to an unconventional campaign by former model Liza Golden-Bhojwani. Tired of the pressures placed on her by casting directors and stylists, Liza quit modeling a few years ago and became a voice for women who were struggling with body image in the fashion world. In March of this year, her message exploded on Instagram, launching her into the national spotlight. Here’s more about her journey to personal understanding and acceptance.

A little flashback Friday action for you. This caption will be long and won't fit, so if you'd like to read please find the rest in the comment section….The left side was me at the start of the peak of my career. My first proper fashion week where I was actually the size I needed to be. I was booking amazing shows that one never thinks they actually could, walking with girls who I once looked up to, it was a serious adrenaline rush…but after fainting one night in my apt whilst preparing one of my very low cal meals (I think it was 20 pieces of steamed edamame if I remember correctly), I called it quits with the diet and workout regime I was put on and decided I could do it on my own. I thought to myself, I can still be this thin, but I'll just eat a little more so I don't feel so horrible. Well, eating a little more turned into eating nearly a bag full of almonds, which then turned into eating full size meals, which then turned into a full blown binge. I was craving every single food you could imagine and I was giving in to every craving even though I knew this was such an important time in my career. I made it through NYFW okay, no one had noticed any weight gain, but by the time I had gotten the LFW I could see the pounds starting to show both in the mirror and on the measuring tape, but I kept quiet obviously not wanting to sabotage myself. I found myself going to the grocery store and picking up raw vegetables to try and make up for the near two week binge I had in NY, but I didn't see any weight coming off no matter how "healthy" I was eating and no matter how many workouts I fit in. MFW came and I knew I was bigger and by bigger I mean a 35.5in hip rather than the 34.5in hip I started with in NY, I played it cool and just pretended everything was normal. I did end up booking shows, Dolce & Gabbana being one of them. Which I afterwards received online criticism about my thighs looking fat…Anyways PFW came about, and I found it impossible to resist those chocolate croissants 🙊 I went on many a casting with one exclusive option being on my schedule, but after meeting the client I knew the reason for me not nailing the gig, my size…

The story behind Liza’s transformation has a frightening beginning. A single glance at these before and after pictures will tell you that. Passionate to make it as a model, the young Liza on the left ate a mere 500 calories a day or less to slim up for shows. It was a deathly diet that resulted in plenty of jobs but left her body ailing and worn. After fainting while preparing one of her daily steamed edamame meals, she decided to call the minuscule diet quits.

The only opinion that matters is your own 😉 Own and embrace every curve 🙌🏽 #slayallday #normalizeus #shineon #bodypositive #bodylove #effyourbeautystandards Captured by: @rahuljhangiani Hair & Makeup by: @inherchair Tap for outfit details

Initially, Liza’s decision to quit starving herself and eat like a normal person didn’t result in any drastic change in her career. The following spring, she made it through NYFW without major designers realizing much of a change except that her energy level had improved. It was when she auditioned for London Fashion Week a few weeks later that the extra pounds start to catch up with her. One too many New York slices, perhaps? Whatever tipped the scales, it proved the defining moment for Liza. She decided the fashion world wasn’t worth the toll it took on her body and left for good.

This day one year ago, I legally married my very own Prince Charming. Every wife thinks their husband is the best, as we are all completely biased, but I have to say my @thirdeyejedi is something special; unlike the others, and unlike anyone I've ever encountered. Literally the most self-less human being who is ready to drop anything and everything to put me first. He works so hard day in and day out, travels to random and far away factory's in remote areas just to support our little family and still supports my dreams while he struggles no matter what….He has been dressing me, showering me, brushing my hair and styling it, cooking for me, amongst countless other things for almost two weeks due to my broken wrist… I have never been treated well by men in my life, maybe it was bad luck, maybe it was the negative space I was stuck in for years upon years, maybe it was me giving in to all the negativity that was spoken over me in the past, but then I met you and my life lit up, it had meaning and a purpose worth living for. A reason to smile, a reason to laugh, and a reason to BE happy. Your CONSTANT positive energy is like having the sunshine next to me all day long. It's hard to keep up with such positivity when you have the completely opposite personality, but that's why we were made for each other. We are the perfect balance when mixed together. You literally are my best friend. I always seek your advice not because I need your approval as a husband, but because as my best friend I know your judgement is literally on point. I don't know how this year has flown by so quickly, but as they say, "time flies when you're having fun". Cheers to another year of us, cheers to another year of happiness, cheers to another year of fun as the #goldenjedi keep taking over one day at a time. I love you! ❤❤ #goldenjediforever #goldenjedi #goldenbhojwani #goldenjediadventures

THE IMPORTANCE OF SUPPORT

Liza made a bold choice when she turned from a successful career on the runway to pursue other interests. Heroic as her determination is, she’d be the first to say that her personal revolution would not have been possible without the help and support of family and friends. If you’re struggling with body image or issues related to your weight, don’t hesitate to ask those closest to you for help and guidance. Changing how you approach your appearance is hard. No one should have to go through that process alone.

38-31-43 … these numbers would have given me a heart attack a couple of years ago. But now, I'm nothing but happy with them ❤ Love your body & treat it with respect. #lovetheskinyourein #bodypositive #effyourbeautystandards #shineon #unretouched #naturallight Updated digitals by @thirdeyejedi

EMBRACING THE NEW YOU

To shatter industry expectations when it comes to weight, you must be comfortable in your own skin. It can be tempting to feel like you just didn’t have enough perseverance or discipline to manage your body effectively. That’s a dangerous myth to toy with. Sure, you could eat 20 pieces of edamame a day until your ribs were showing, but is that worth the toil? Accepting your body is all about respecting what you have naturally. Don’t force yourself to be unnaturally skinny or indulgently large. Find the happy medium where you’re eating tasty food and exercising a good amount. That should be your optimal normal.

You don’t have to paint a sign and march with it to join the voices demanding a more realistic approach to body image from the fashion industry. Accepting your natural beauty despite those pencil-thin models littering billboards and magazine across the globe is already a huge step. All it takes is a choice like Liza made back in 2012. Dare to pick the free future. We could use a few more iconoclastic fashionistas.

Liza Golden- Bhojwani deserves your applause. Her inspiring transformation is raising awareness for self-acceptance and more reasonably sized clothing from top fashion brands. One a more personal level, she’s changing lives by reminding women all over the world what really matters. Don’t try to live up to corporate expectations every season. Live up to what feels healthy for you.