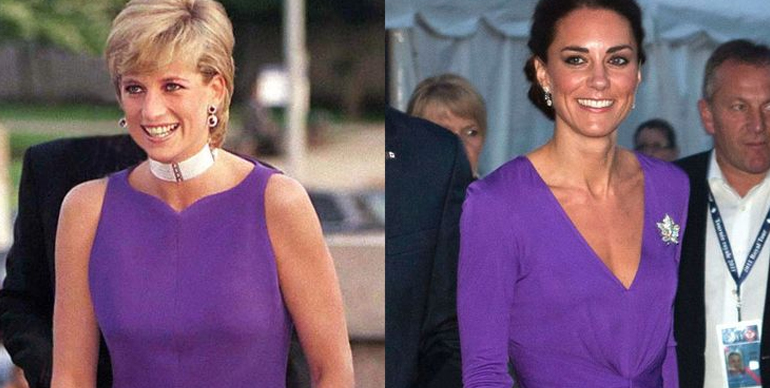 The return of 90s fashion is old news by this point. People still discuss the phenomenon like they’re discovering it for the first time, but truth be told the decade that gave us Seinfeld and Sex in the City has been alive and well since the mid-2010s. Nowhere has the gradual hold of 90s vintage been more obvious than in the style choices of England’s Duchess of Cambridge Kate Middleton. Though the newest member of British royalty has been a fashion icon for most of her adult life, it was only in 2017 people began to realize her penchant for copying the stylish legacy left by the People’s Princess. As you look back on Kate Middleton’s wardrobe over the past few years, it becomes blatantly obvious she’s been imitating the outfits of one of the 90s most influential fashionistas since 2011. Twinning may not be common in the world of kings and queens, but when it comes to Diana and Kate, matching seems to be the name of the game.

Perhaps it’s a stretch to say these black coats and poppy blossom buttons are an example of twinning. After all, when you’re attending a memorial service why wouldn’t you wear black? Yet, the subtle similarities like that wide-brimmed hat and velvet coat seem more intentional than a simple day of national mourning.

OUT FOR A STROLL

The double-breasted jacket dress has changed over the years, but despite these changes, there’s still a gentle twinning effect here. Though Diana’s sailor-inspired dress has a much more casual aura about it, there’s clearly some imitation going on with the ladies pronounced white hats and notable necklines.

BOWS IN THE CENTER

Uniformed looks were certainly more popular in the 80s and 90s than they are today, but Kate is making a valiant effort to bring the marine collar back. This design from Alexander McQueen doesn’t feel nearly as regimented as Diana’s navy blue outfit, but it still speaks to the sea-faring heritage of the British.

Take away the glitzy belt and these two looks are practically identical. Sure, Kate has that minimalistic touch that’s a clear indicator that the gaudy 90s are over, but in a way, that’s the genius of this royal pair. Kate Middleton manages to evoke Diana without relegating herself to outdated fashion. Even while twinning, she remains very modern.

Switch these buttons around a bit and you’d have the same loud pink dress. There are few examples of modern pink that illustrate this clearly how the color’s return is a direct comment on fashion trends in the 90s. What a way to remember Diana.

If you’ve fallen for the myth that polka dots are a 50s throwback, think again. As popular as speckled dresses were in the Golden Decade, the last time they were super cool was the 90s. Now, thanks to women like Kate, this playful pattern is back for round three. It’s so easy to add to your wardrobe, you might as well do it now.

Kate is totally twinning with Diana. Luckily, the 90s renaissance is helping transform what could be dull, repeat outfits into a fashion statement. Was there a celebrity from the 90s you always wanted to dress like? Well, this is your chance. Who knows how long this chapter of vintage fashion is going to last.