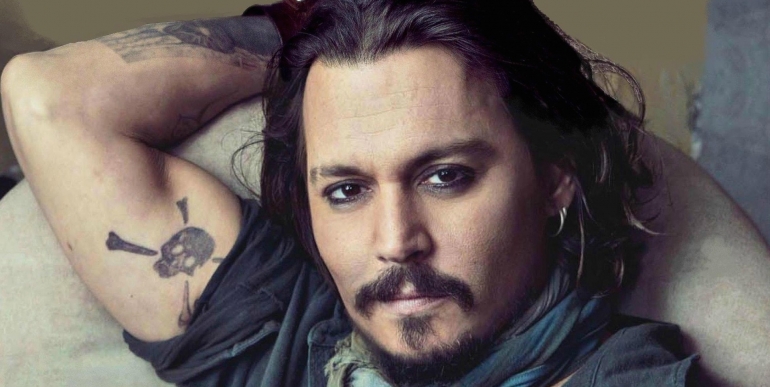 Johnny Depp was tearing up headlines last week with some none-too-fashionable comments last week. While we have no comment about his most recent claim to fame, it seems a fitting time to look back at all the various looks of Johnny Depp. Specifically, his impressive versatility when it comes to Hollywood fashion. Now, most of these outfits weren’t picked by Johnny himself. These are the expansive work of a ton of costume designers over the past four decades. What is impressive his Depp’s ability to wear each one comfortably with confidence. More than any other actor, he demonstrates that style can be as fluid as you want it to be with the right swagger and presentation. In an age when everything has the viral potential to be a trend, take some hints from this ultimate jack of all wardrobes. No matter what the film, his style is always on point.

Before the eccentricity of Tim Burton made Depp the king of fiery cult characters, young Johnny showed us the true potential of vintage sweats and men’s crop-tops.

Sometimes fashion trends resurface where you least expect them. Depp’s simple white t-shirt and greased up hair for this 1985 flick carried on the Grease legacy and introduced the 80s to 50s retro.

A rebellious coif, battered jean jacket, and tough guy jewelry were all popularized in the character of Officer Tom Hanson. This classic Depp character inspired mainstream fashion to give punk more of a chance.

Another play on punk culture, Depp’s Edward Scissorhands went full Marilyn Mason and brought goth style to a sympathetic character. It paved the way for other somewhat eerie stars like Tilda Swinton to strut their unique fashion sense.

When Johnny first wore the white t-shirt, it was just a casual top for some beachside fun. A few years later, he hopped on a motorcycle in jeans, the white tee, and a leather jacket for a fuller example of 50s chic.

Tapping into the 90s fascination with grunge and unkempt brooders, Depp grew out his hair and donned country boy attire as the lead in What’s Eating Gilbert Grape? Again, he served a Hollywood’s means of translating a subcultural wardrobe into mainstream fashion.

With energetic strands of hair hanging around his ears and a classic bowler hat, Depp took grunge and turned it into boho chic for Dead Man. It was the ultimate 70s and 90s combination but never quite caught on.

Trading in the 50s biker for a more contemporary rebel, this Depp look made polo shirts look badass and leather jackets feel modern. That Italian haircut isn’t too bad either.

It’s impossible to walk through Johnny Depp fashion without lamenting these gaudy shirts. Decked out in colorful prints that are only acceptable as tourist garb in the Bahamas, it mainly works because the story is so psychedelic.

Long hair is no stranger to Depp, but even his expertise rarely churns up something this good. Pulled back in a way only the French can, this hairstyle gives the actor mystery and attitude without making him seem full of himself.

Everyone knows the Jack Sparrow look. There was a brief period when everyone was trying to wear it too, but that was years ago. Unless you’re headed to a costume party, admire this hairstyle at a distance.

It’s a perm of sorts with frizzy sides and a handsome part in the center. Depp wore this hairstyle for two characters, the vengeful Sweeney Todd and wacky Mad Hatter. Though it works best with a suit, it goes with quite a few fashion genres. Think of it as a type of afro when you’re deciding what occasions to wear it for.

From calm to extravagant and simple to complex, the looks of Johnny Depp are quite a thing to navigate through. Though they may seem random, there’s a lot you can glean from them if you keep a careful eye out. Rock that vintage chic, mix some tasteful color in, and you’ll be well on your way to captivating the crowd like Johnny.