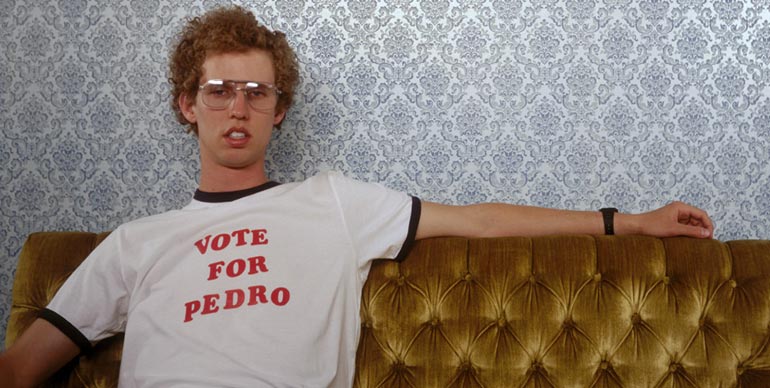 T-shirts. Everybody owns them. T-shirts are so popular there are tons of iconic ones you can recognize at a glance. Let me refresh your pop culture memory of the most iconic t-shirts of all time.

Milton Glaser scribbled this design on a napkin. Before long, it was everywhere. Who doesn’t love the Big Apple?

Thanks to Napoleon Dynamite, we’re all voting for Pedro. In this political climate, he’s coming across surprisingly well.

Bluto had it emblazoned on a sweatshirt, but this simple Animal House graphic works on t-shirts too. Belushi forever!

Sticky fingers icon or just a playful tongue, this t-shirt took off after The Rolling Stones famous release. It’s now one of rock ‘n’ roll’s most famous symbols.

The perfect superhero everyone aspires to be. No surprise he ended up with his own t-shirt. Over 50 years later and we’re still wearing it by the 100s.

Might not be the perfect superhero his predecessor is, but he’s the hero Gotham deserves. I don’t see this black classic going into the vault anytime soon.

The café where you can dine surrounded by music memorabilia has become a staple of both the restaurant and music industries. Rock on, dude!

Mixing in the high class with the bum look for an alternative ‘80s throwback. This is the ultimate lazy prom outfit.

The Drug Abuse Resistance Education program began in 1983 and it’s been a hit logo ever since. Just Say No! Thanks, Nancy Reagan. Maybe the killing suggestion is a little extreme though…

A Marxist hero turned commercial fashion statement! It’s ironic and eerie all at once. Wear it with cargo pants and you’ll be very suspicious.

JUST DO IT – NIKE

Here’s a little not-so-fun fact for you. The genius Dan Wieden credits this slogan to the final words of a convict on Death Row.

Nearly ever blockbuster from the 80s produced iconic t-shirts, but Ghostbusters especially dominated the clothing racks. Reminding everyone who to call since 1984, the frightened little ghost trapped in a red circle is a classic. Bring it on, you spirits of New York!

…AND ALL I GOT WAS THIS LOUSY T-SHIRT

I bought one of these for my brother when I came back from a class trip to Florida. Once, it was the most acceptable sassy gift that no one ever wore. Nice one.

It was cool in the 60s when tie-dye was new and original. Once Rit Dye started producing the look by the thousands, it was just another shirt with too many colors.

Iconic t-shirts can inspire a few juvenile laughs, too. Don this shirt and every situation has the potential to be a comic scene. It just grows old in less than a minute, unless you’re drunk…