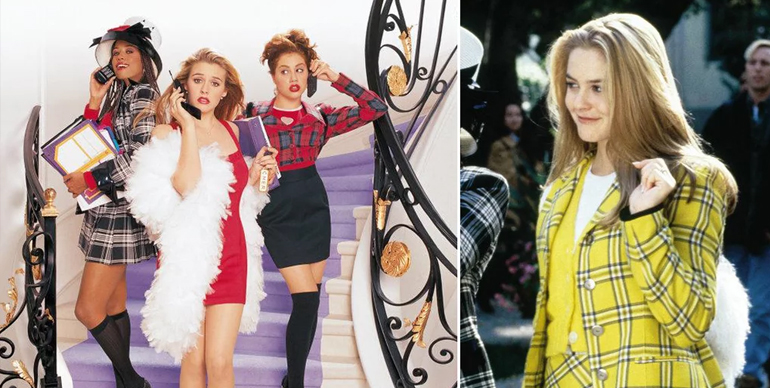 Everyone knows something about iconic movie fashion. You may not have seen Breakfast at Tiffany’s, but you’d recognize the immortal image of Audrey Hepburn in a black dress and pearls. Few people remember The Seven Year Itch as a film, but there’s no denying that infamous shot of Marilyn Monroe dress billowing over a subway grate. Movie fashion icons are some of our greatest fashion ambassadors. They’re experts at blending personality with the latest fashion trends. The best ones even embody the philosophies of contemporary culture in their outfits. To celebrate the end of awards season, we’re looking back at iconic movie fashion that stuck with us long after the credits rolled.

When siren Anita Ekberg emerged from the Trevi fountain in a black dress, Hollywood was awestruck. It was the sexiest movie scene in 1960 and remains one of film fashion’s greatest moments. The film owes a lot to the fashion industry. La Dolce Vita was inspired by director Fellini’s fascination with designer Balenciaga’s signature sack dress.

Not many people watch Love Story for its fashion prowess, but Calvin Klein did. According to him, Ali Macgraw and Ryan O’Neal’s prep-school wardrobe “exemplified this great American style.” Ryan’s casual outfits gave off a classic 1970s vibe, but the true fashionista was Ali. Her woolly bobble hats, pea coats, and stripe-covered college attire are are still fashion blog worthy.

You can’t examine iconic movie fashion without looking at this film. Annie’s menswear-inspired wardrobe in Woody Allen’s classic was a game-changer. Mere weeks after the film’s release, baggy trousers and fedora hats were already trending in women’s attire. When the media revealed many of the film’s outfits came from Diane Keaton’s own wardrobe, she became a fashion icon in her own right. 1977 was a good year for film fashion.

It’s the most iconic movie fashion piece in recent costume design. This emerald green silk dress towers over Atonement, the historical drama in which it is featured. Costume designer Jacqueline Durran didn’t win an Oscar for the famous gown, but she got to see hundreds of copycat designs on runways all over the world. These various imitations made green silk slips the signature piece of the 2007/08 winter season.

In this Ridley Scott film, the futuristic streets of LA are riddled with weird, cultic outfits. Though its punk-inspired wardrobe made Blade Runner one of the top fashion movies of its time, the finest item in the film’s wardrobe was this fur coat. It blends the sophistication of Audrey Hepburn with David Lynch’s trance-like strangeness. Actress Sean Young was allowed to keep the coat after filming, making her one of Hollywood’s most unlikely stars of style.

If you were a high schooler in the 90s, Cher and Dionne were your guides to adolescent style prowess. 53 different kinds of plaid were worn in this iconic movie fashion extravaganza. Although Alaia mini-dresses, matchy-matchy suits, and knee-length socks seemed extremely important in high school, the only element of Clueless fashion that endured until 2017 is the teenage walk-in closet.

Before matchy-matchy suits, there were bright, padded blazers and clashing plaids. The cult classic Heathers was the 80s precursor to Clueless with a lot more nasty gore. It also gave us Winona Ryder, Christian Slater, and that unforgettable red scrunchy of power. Scrunchy sales nearly tripled after the film’s release in 1988.

Like it’s subject material, the searing red lipstick and heart-rimmed glasses from Stanley Kubrick’s classic film have a weird legacy. Despite the movie’s poor reception, dozens of people started wearing bright red lipstick after its release. The glasses, never worn in the actual film, sparked an entire style movement in Japan. Lolita fashions one of those rare cases where a film’s costumes are its defining quality.

When it comes to contemporary culture, few costume designers have portrayed stereotype better than Marilyn Vance. The woman behind all of John Hughes’ Brat Pack films, Vance knew how to make adolescent costumes accessible will still making intelligent comments with each outfit. Thanks to Andie’s unconventional prom dress to Duckie’s eccentric wardrobe, Pretty in Pink was her crowning achievement. There’s a reason this film endures in movie fashion lore.

Never has a costume from a thriller film stood out like Grace Kelly’s voluptuous skirt in Alfred Hitchcock’s Rear Window. The famous dress, adorned with an ominous grapevine knit at the waist, was the work of costume design god Edith Head. It embodies the princess-like actress who captivated a nation. Stunning, graceful, and gently bewitching.

Every costume in this fun, 50s-meets-70s wardrobe is on point. Grease also boasts one of iconic movie fashion’s most fabled transformations. When good girl Sandy goes from fitted sweaters to a skin-tight black catsuit for the final scene, the suit was so tight Olivia Newton-John had to be sewn into it on-set. This famous musical played a huge role in how contemporary culture viewed the wholesome 1950s, paving the way for films like Pleasantville.

You can’t make an iconic movie fashion list without this infamous costume. While the icy white dress was a minimalist feat of its own, it’s remembered because Sharon Stone wore it commando. When she shifted her weight in 1992 and showed the world she was indeed nude, the dress became a legend.

Movie wardrobes are wonderful lessons in how style can communicate character and personality. Perhaps this is why we love them so much. Unlike the fashion runway, films empower us to imagine all sorts of outfits in everyday scenarios. It’s still an illusion, but a far better one.