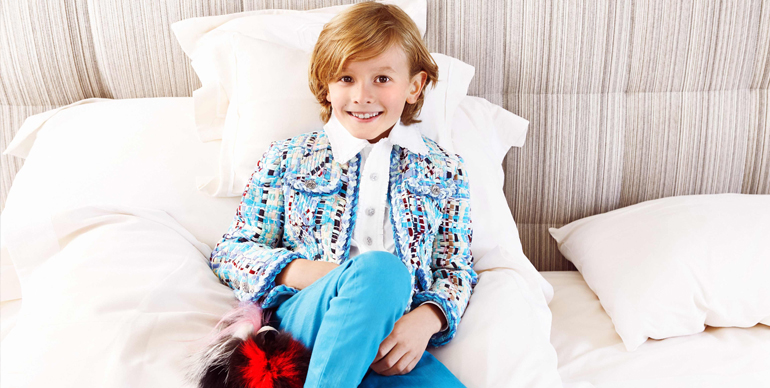 Think back to when you were seven years old. There wasn’t too much to think about. Your days were full of school and homework, then video games or dolls or running around outside. Being cool was defined by how many toys you had and whether the kids in class liked you. Sure, maybe a few of us were thinking about appearances even back then, but even that was more about growing up than looking good. Makeup was a phenomenon because you were wearing it, not because it was the latest from some designer brand. Now, come back to the real world. There’s a boy, Hudson Kroenig, who is just like you were but one of runway fashion’s favorite babes. He sits with the best of them at parties and knows his own shoe size. Here’s a taste of what big time life is like when you’re a seven-year-old kid.

WHEN DAD’S A MODEL…

As dramatic and endearing as it would be if Kroenig has forged a career for himself at the age of two, that is as impossible as it sounds. To make it in the fashion world, you need connections. Luckily for the little Hudson, his father Brad had just the thriving career to give his son a chance at the big time at an extremely young age.

It was the Spring 2011 Chanel show that launched Hudson Kroenig into the limelight. Dolled up in a tiny Chanel suit of white tweed and denim-on-denim, Brad’s wonder boy walked the entire runway of the Grand Palais hand in hand with his father. History was made that night and a star was born.

IN HIS OWN WORDS

Famous and articulate as he is, Hudson still has an innocent, watered-down way of describing himself. If you ask him about his appearance he’ll tell you his hair is blonde, his eyes are brown, his skin is “a little beige-ish, a little gold-ish,” and he is 49 inches. Hudson also likes to brag a little about his big pecs and being “lean like Daddy.” It’s almost too adorable to handle.

When you’re a cool young kid like Hudson Kroenig, you end up in unexpected places. As both a model and the son of one of Karl Lagerfeld’s few friends, Hudson ends up at dozens of luxurious parties has had quite an impressive roster of “babysitters.” Gisele, Katy Perry, and Lagerfeld himself have all pitched in at times to keep this youngster entertained and safe while daddy was off working.

One of the most stunning tales of Hudson’s young modeling career is his relationship with the untouchable Karl Lagerfeld. The famed designer is quite fond of the young fastionisto and agreed to be his godfather. The two are on such familiar terms Hudson refers to him as “Uncle Karl.” It’s quite a feat to have breached the inner circle so early in life. Most people only dream of meeting Lagerfeld, Anna Wintour, and Rihanna, much less sit at a table with them making jokes at seven years old.

Though much of Hudson’s initial success was reliant on his famous father, it didn’t take the bold young boy to take ownership of his new role. He’s still cute, but the primary reason everyone loves Hudson is because he’s startlingly good at modeling. He works with the best, celebrity names like Pharrell Williams and Cara Delevingne, while still maintaining a semi-normal life at school. There’s a lesson for you. If a seven-year-old knows how to balance private a public life, so should you.

When you talk to Hudson, it’s clear the fashion world is his choice of profession. He was born into it, but as he’s watched family and friends work in the business it’s become a personal passion for him as well. As much as something can be for a seven-year-old, of course. It seems recently Lagerfeld has taught the young model how to sketch. Perhaps a Hudson Kroenig collection is on its way…

You can do a lot with your life by the age of seven. If you know the right people and pinpoint your passion, you’ll go far. Remember that when you’re procrastinating over the weekend. There’s a seven-year-old shaking Karl Lagerfeld’s hand while you sit there on the couch watching Netflix.