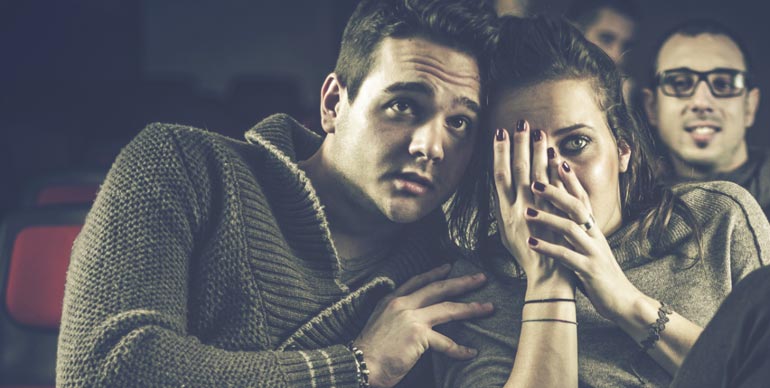 There is a very specific love we all have for horror movies so bad they’re good. Sitting there on my couch this past weekend, I have uncovered some of the best worst movies in existence. Movies like Birdemic: Shock and Terror and the infamous cult classic The Room. They are so terrible, I find myself genuinely impressed by the audacity of their storytelling. However, of all the bad movies out there, bad horror movies hold a special place in my heart. There’s something really cathartic about laughing at cheesy cannibals and killer leprechauns “in the hood.” So, if you find yourself alone on your couch for Halloween, don’t despair. Join me in celebrating the best of the worst with this bad horror movie list.

What is a robot monster? In this film, it’s some guy in a gorilla suit and diving helmet. I’m not kidding. The costume has a grey chest and furry arms and legs. This thing is sent to kill humanity in preparation for an alien invasion. He destroys earth and then spends the rest of our time in the best worst movie chase ever trying to kill the five people he forgot to kill before.

Don’t get me started on this one. Even the title is so bad it’s funny. It sounds like some children’s Halloween sing-along cassette tape! It’s another 60s radiation rampage, this time impersonated by a monster with enormous eyes and chicken pox. The best part is, everyone thinks the monster is an astronaut gone mad. At the end of the film, we learn the astronaut is alive and well after all. The whole film was literally pointless. You’re welcome for saving you the time.

I’ve come to love Ed Wood for his low-budget brilliance. The man was as eccentric as they get. He definitely belongs on any bad horror movie list. I’m going to introduce one of his most famous classics next, but before I do have a pass at this. A couple wandering in a cemetery hoping to get inspiration for a horror novel land in the middle of a party of monsters. They are tied up and forced to watch an endless dance of the dead. This might be the best worst movie idea ever.

The king of bad movies didn’t get his nickname for nothing. Let me give you a few examples of the amazing horrors that await you in this film. Let’s start with the plot. Aliens come to earth and resurrect the dead to create a zombie army to stop man from creating a weapon of mass destruction. One of the lines in the script actually says, “Future events such as these will affect you in the future.” If you’re not laughing, you’re crazy.

We all love Stephen King for his horror successes. It might be worth noting that all these were directed by other people, not King himself. When King did take the directorial chair, he ended up creating one of the best worst movies of all time, right up there with Troll 2 (we’ll get there). This is on the top of my list to re-watch every Halloween night. I just can’t get enough of comic machine destroying the world. A soundtrack provided by AC/DC is the perfect sidekick.

When you have a budget of exactly $0 and you have to re-edit the footage you took for the original film, you get this film. The best part about this cult movie is Ricky, the over-the-top killer played by Eric Freeman. Who else proclaims, ‘Garbage Day!’ with such zeal as they go about killing their neighbors? It doesn’t get much better, or worse, than that!

You have to laugh at a premise like this. Two brothers own a health food restaurant. The animated brain and genitals of their semi-deceased uncle helps them kill an unsuspecting women in an attempt to assemble a blood feast to resurrect an ancient Egyptian goddess. Do you really need this crazy of an excuse for gore and boobs in a bad horror movie? Sure, why not.

Another name for “movies so bad they’re good” could be, “Evil Gremlins Kill Everything.” The alien creatures that kill off everyone in the film look more like Spielberg’s furry pets than cruel aliens. I was a little disappointed when the killings appeared based on the victim’s greatest desires. Who needs “seven deadly sins” in a bad horror movie? Cheesy. Luckily, that’s the film’s only attempt at logic.

If recent events have given you coulrophobia, then maybe you won’t find this film as funny as I do. I think this is the perfect movie for overcoming clown fears, though. It’s all about aliens who look like clowns and decide to come down to earth and wreak havoc by harvesting humans as sustenance. Once they kill their prey, they wrap them up in a cocoon of cotton candy. Are you really still scared?

The ultimate best worst movie ever, you should be ashamed if you don’t get my references here. I mean, is it not a sign of awesomeness when a film’s climatic moment involves a life-saving double-decker baloney sandwich? If you haven’t seen this film yet, Ohhhhhhh myyyy Goooooooooooddddd! Ditch the Halloween parties and go home for movie night.

Have you ever imagined what a leprechaun rap would sound like? It might go something like this: “Look at all these glittering goods, I got more loot than Tiger Woods.” The writing for this film is so bad it’s good. Just be aware it uses pretty racist stereotypes to portray African-American rappers. Other than that, this movie is da bomb, homie.