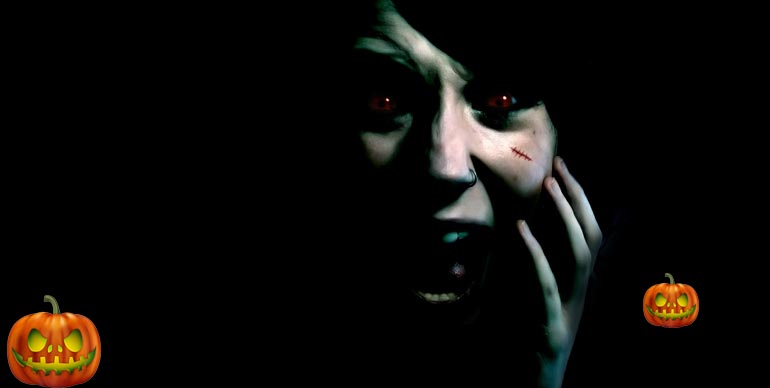 Time for some real talk. Back when you were afraid of the monsters hiding in your closet, Halloween was a scary holiday. Ghosts and zombies kept you up at night. Witches gave you nightmares. You dressed up as the bravest superhero you could to fend off all the evil things lurking about. You thought as you grew older these crippling Halloween fears would wear thin. I have some bad news. Your fears aren’t gone, they’ve adapted. There’s plenty to be afraid of as an adult this Halloween. Rather than blood thirsty zombies hiding under your bed, your fears have shifted to becoming possessed by a bottle of Jack Daniels, or someone else wearing your costume better. Real Halloween fears are inescapable realities you can’t just rip off. Here are five actual fears you should have this Halloween.

SOMEONE WEARING YOUR COSTUME WAY BETTER THAN YOU

Even when you were young, your Halloween costume was a source of pride. If you couldn’t be the only superhero on your street, you sure as hell were going to be the best. When you were nine and the other kid down the street was better, it was your parent’s fault. Now if you show up to a party with an inferior costume, there will be no arms to hold you. Empty your wallet. Take out a loan. This can be your finest hour. If you want to avoid a horribly awkward night of overcompensating as “second-best,” (gross) start planning your costume now. Otherwise, you will succumb to the mother of cosplay Halloween fears.

CLOWNS CREEPING ALL OVER THE DAMN PLACE

You know when John Wayne Gacy dressed as a clown It wasn’t to murder his victims? It was to perform at charity fundraisers, parades, and children’s parties. To his neighborhood, it was the familiar look of a community volunteer. And so the creepy clown was born as a staple of American horror culture. This year it’s really taken itself to a whole new level. It’s more than likely you will run into a few on October 31st. When you encounter a clown, remember you can’t judge them by their makeup. Smiling clowns can be the nastiest. Creepy clowns can be nice, although don’t bet on it. This uncertainty is what makes the clown spook so spooky. For a breakdown of appropriate and inappropriate clown behaviors, read this article. In more concise terms, if a disheveled old clown tries to grab you, run.

EATING AND DRINKING UNTIL YOU PUKE EVERYWHERE

When you’re surrounded by free candy and sugary cocktails, how can you resist? It’s a vicious cycle. The shiny hunks and skimpy-clad vixens at the party egg you on. As you rapidly drink and indulge your sweet tooth, the danger zone approaches. Ideally, the delicious combination of candy, alcohol, and seduction will culminate in blissful and peaceful sleep. However, if things get carried away your night could end in a terrifying puke-fest. Don’t let this adult Halloween fear get the best of you. If you want your evening to end in ecstasy rather than a puking spree, save those ravenous cravings for Thanksgiving.

CHOOSING A COSTUME THAT GIVES YOU PNEUMONIA

If your Halloween end game is getting lucky, you’re going to wear something that isn’t much of anything. When else can you go full kinky in your neighborhood streets? There are other reasons to show skin on October 31st. Maybe you really are dressing up as Tarzan out of love for Edgar Rice Burroughs 1912 novel. There’s also the simple, primal need to stir up a debate. Nudity always invites controversy. However, by 8 p.m. your brilliant idea is likely to become your greatest Halloween fear. It’s common sense. Don’t run out into the mid-fall night without a coat. Wrap up in something and perform a bit of a striptease when you arrive. It’s far better than freezing to death.

Let’s review a little. A mediocre costume is lame. Drinking until puking all over the floor is bad. Getting frostbite to look sexy is stupid. Someone whipping their junk in a clown costume is… No! Unlike the other Halloween fears on this list, Halloween pervs are not your fault. If someone shows up to the party as a Mr. Rodgers with a boner, Billy Cosby with a pill box, or simply a giant penis, beware of these PC violators. The sexy plumber who playfully strikes up conversation is one thing. Someone trying to creepily hit on you while dressed as a total perv is unacceptably gross. Let this question guide your evening: “Is that person acting like a creep or is an actual creep?” If there’s any hesitation, steer clear to keep your Halloween happy and safe.

Adulthood is a bitch. Halloween can’t just be a fun, explosive time anymore. You’re responsible now. You have standards to live up to. Face the real fears of Halloween this year. You got this.