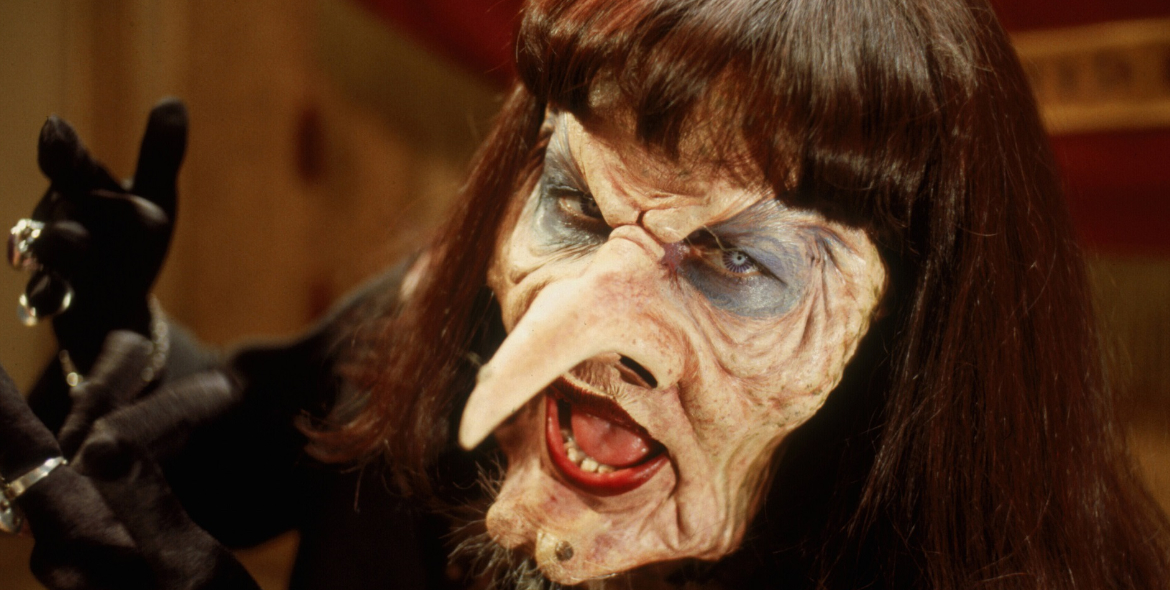 I grew up wanting to be Amy Madison and Willow Rosenberg. What girl wouldn’t want to save the world every week? Casting spells is the ultimate escape. Somehow, I convinced myself that if I were dealing with superhuman issues and saving the world, adolescence would be simpler. I wouldn’t have to worry about homework and acne. I’d be a mighty teenage witch! I’ve since learned a normal life isn’t all that terrible. I don’t need to be fighting wizards to feel fulfilled. (Thank goodness.) I still love my sentimental witchy heroines, though! You must have some silver screen heroines too. I bet I can guess a few of the ones on your list. Let’s see the greatest witches of all time.

Aren’t all mothers-in-law a little evil now and then? All this poor witch wants is the best for her curious daughter. Maybe not a dream witch, but definitely a popular one.

I know, I know. How dare I put my favorite magic addict on this list? I can’t be the only girl who wanted to be a Joss Whedon witch in high school. Come on out, you fangirls.

MADAME MIM (The Sword in the Stone)

When Mim and Merlin were battling it out in some whimsical cartoon fight, wizardry and witchery looked almost as fun as they were at Hogwarts. If nothing else, Mim has the best purple hair ever.

REGINA MILLS (Once Upon a Time)

A more modern witch with a fairy tale twist. I imagine this TV character being the villain most mothers look to after a particularly frustrating day of mom life. Wouldn’t it be nice if you could make everyone obey at the snap of a finger?

The sea witch! Not many of us can “love” Ursula after what she did to poor Ariel, but how can I do a witch list without including this drag queen-inspired beauty? Now, can I please hear a rousing rendition of “Poor Unfortunate Souls?”

She tried to destroy the world once, but think of how many times she saved it. Amy was a bad influence on poor Willow. You all know I was obsessed with this feisty girl when I was little. Who else wanted to be Willow Rosenberg when they grew up?

THE WICKED WITCH OF THE WEST (The Wizard of Oz)

She was wicked and most famously, she was melting. This pointy-chinned fiend of Oz fame had most of us scared silly back in the day. Now, we have Wicked to explain her actions. This villain is getting a heroine makeover.

In a family of silly sisters, Winnie got the dirty work done. She was the brain behind the brawn. Sometimes she was the brawn too. Anyone with annoying little sisters could empathize with her when concocting a deceptive plan.

Back when Michelle Pfeiffer was a beauty icon, the sight of her in old age makeup was a frightful thing. We understood right away why she stole youth from younger girls. She was one of the scary ones, though. Probably for that reason.

This is one bad witch. From the smoke child who murdered a king to her mysterious age, I must warn you that this witch is a liar. I hope no girls are running around holding her up as a role model.

It’s by far one of the most compelling pieces of witch fashion I’ve ever seen. The roving black dress with purple highlights is nearly more fashionable than the royal family’s garb. If you love fashion, adopt the Maleficent look.

I confess, I’m not sure if I love this witch. I think I’m just blown away by the alluring, hateful glare of Charlize Theron. Ravenna does have class, though. The rustic dress and geometric crown are more regal than the average witch.

THE WHITE WITCH (The Lion, the Witch, and the Wardrobe)

Calling a real life person a witch is never a compliment. Yet, Tilda Swinton proves the exception. This is why Disney’s first Narnia villain makes my list. Tilda is the harshest badass actress out there. Put her in a witch costume and game over.

If I sat here and recounted all the Harry Potter witches for this list, I’d betray one of my worst obsessions. I’ve chosen to name just one, the wildest of them all. Beautiful, crazy, and sadistic, Bellatrix is a passionate combination of many things I want to be, and quite a few I fear I am.