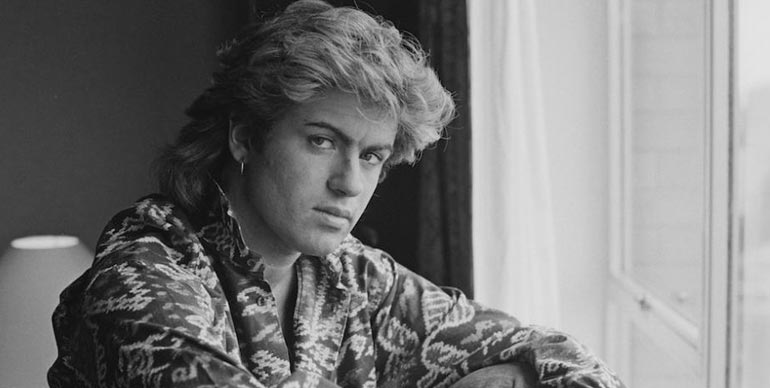 It’s time to sit back and remember George Michael the fashion icon. He was shameless in all the ways we wished we could be, from sexy mesh t-shirts to tasseled leather. According to George Michael style, 80s fashion was sexy as hell and 90s fashion only improved on the decade of trends that came before it. Does it get much bolder than that? Journey back with me to the very beginning and let’s relive the legacy of George Michael fashion together.

Wham! Fashion – Wham! recycled the iconic Katharine Hamnett t-shirt design one year later and had their band name put on the front in bold, orange letters. The t-shirt was now a band staple.

Short Shorts – The hyper-sexualized male was gaining traction by the mid-1980s. Wham! adopted the trend, beginning to popularize new fashion trends to their pop culture following.

Neon Sweatshirts and Big-Ass Mullets – George and Andrew embraced loud colors and big hair. If you thought the 80s obsession with neon was too much, they’re part of the reason why.

High Fashion Meets Popular Music – Not everyone was comfortable in mesh tops and highlights during the 80s, but Wham! made you feel silly for being self-conscious. The band knew how to say, “Do you?” without uttering a word.

The Leather Jacket – After the t-shirt, Wham! moved on to the jacket that would become a George Michael fashion staple. Suddenly, you didn’t have to own a motorcycle to rock a leather jacket.

Colorful Casual – Once George Michael started out on his own, he had to work out his own distinct style. It took a few tries. This vibrant button-down and jean combo was one early incarnation.

The Earring – There isn’t much more I can say about the earring. Most of us didn’t dare try the golden crucifix, but we sure admired it.

The Homberg – It wasn’t a staple like the close-cropped beard and singular earring, but this bohemian hat was prominent in the George Michael style guide. A little bit of 80s fashion left over from the 70s.

Those Bullfighter Jackets – They were a combination of Wham!’s leather jackets and emerging 90s grunge. It’s a shame the fashion icon only wore them for a few awards ceremonies at the turn of the decade.

Freedom! ‘90 – Completely blurring the lines between the fashion and music worlds, this defining video saw five leading supermodels lip-singing to Michael’s lyrics. It gained more traction than all the leading fashion covers in 1990 and made the baseball cap ‘stylish.’

The Complete and Utter 90s –The mix-and-match elements keep this retro fashion look from feeling mundane, but at its core this is a wife-beater, yuppie sport-coat, and acid-wash blue jeans. It doesn’t get much more 90s than this.

The Leather Tassels – In the 90s, Michael worked through several looks incorporating his classic Wham! outfits into modern fashion trends. One of these combinations resulted in this decade-defining tasseled leather jacket we still get a kick out of wearing today.

The Jean Jacket – Another outfit recycled from Wham! days, this jacket may have been partially responsible for the 90s denim renaissance. You may look back on the trend with regret, but what can I say? Few people can wear denim like George Michael.

The Orange Suit – When Michael approached 40, he traded in the crazy jackets for suits. This simple orange outfit has a tropical personality without sacrificing class or style.

The Purple Suit – Slightly more formal than the orange suit but with the same mix of playful and style, this suit solidified George Michael’s reputation for wearing suits on stage. By the early 2000s, he had triumphed at nearly every fashion level.

Here’s to Katharine Hamnett t-shirts and hyper-sexual short-shorts! Here’s to mirrored aviators and leather jackets! Here’s to the fashion legacy of George Michael and every other legacy he holds. RIP, Mr. Michael.