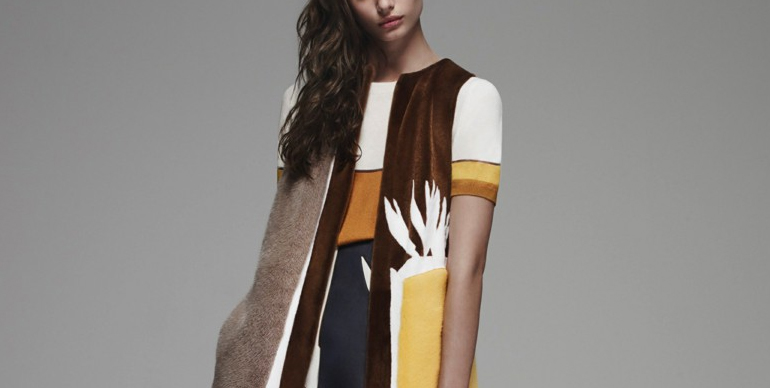 We’ve finally seen enough shows to begin discussing fashion trends for 2017. Quite a few can be traced back to last year’s fall runways. The bomber jacket is still in, though designers have gotten rid of the shearling. Tech fusion products are all the rage. Clothing like the “connected” jacket from Google and Levi’s isn’t quite ready for sale, but it’s getting close. Gender neutral pieces have also been featured at nearly every 2017 fashion show so far. Spring 2017 fashion is shaping up to be more inclusive and norm-defying than ever. Here are the standout trends you should keep an eye in the up-coming months.

If ASOS said it, it must be true. In 2016, they introduced us to streetwear chic with the metallic sneaker. One year later, they’re advising you to embrace metallic everything. 2017 is the year to shine. Rock those satin slips bought for last year’s 90s renaissance and find a bomber jacket with a satin back. You can even experiment with satin shoes. After last year’s nostalgic Western chic, there is some sense to continuing our 70s nostalgia with some space-wear chic. Not convinced? Check out Bill Nye and Buzz Aldrin on the NYFW catwalk.

If you’re a Richard Magazine fan, you’ll know we spent three articles of time in January showing you how to incorporate this chartreuse-like shade in your wardrobe. It isn’t as hard as it looks. Greenery might seem overbearing at first, but you need to welcome it into your wardrobe this year or you’ll be way behind. Just remember everyone else is stressing about how to incorporate the color into their outfits too. If we all dedicate ourselves to a spring of Greenery, no one will look out of place.

Somewhere between bell-bottoms and parachute pants, we got this wide leg variety. It’s been a sure thing at every Spring 2017 fashion show so far. Pair it with a loose waist tie and simple button-down. This is the chic vacation look for Paris or Italy this summer. It’s gentler than the bell-bottom and doesn’t have the embarrassing crotch sag of parachute pants. It’s one of the women’s style trends that feels nostalgic and new all at the same time. It’ll give the wind something to play with as you stroll along the boardwalk.

Will 2017 be the year we get to try out all these smart clothes we’ve been hearing about? The technology behind “connected” jackets and smart fabrics is still new, but it’s developing fast. Ralph Lauren recently unveiled new athletic apparel that monitors heartrate, breathing, and stress. The goal is to develop clothes that adjust their temperature and comfort to the way to body heat and strain. Smart fabric is still fresh. Most likely, the wearable tech of 2017 will be Iron Man-like gadgets like Snapchat’s new Spectacles, glasses with built-in cameras, or phones you can scroll through with a swipe of the hand.

Metrosexual isn’t new, but each year the line between feminine and masculine fashion blurs a little bit more. In 2017, Rachel Comey is taking the plain and muted colors of 2016 menswear and using them to make clothes anyone can wear. The iconic change in this year’s gender neutral fashion is that you can find it on store shelves at manageable prices. These clothes aren’t merely a fashion statement. Designers are using their products to introduce society to marginalizing minorities and promote acceptance. Political fashion, anyone?

The affectionately-named ‘ugly’ holiday sweater may actually be in style come fall of 2017. According to J.W. Anderson’s, colorful knits are back in style. Look at these decorative squares from the designers Autumn 2017 runway at fashion week. You can wear these granny squares around your neck, as patches over a hole in your jeans, or front and center on a sweater. The focus is on homespun goods that feel festive and rustic. Say thanks to grandma. She just got you in style.

What kind of fashion trends list would this be without a contribution from Bella Hadid? The famous model’s Instagram account is littered with this military cap and it’s been the topic of discussion on many a fashion blog. It looks like women’s fashion has found its first big viral trend of 2017. Think of your fiddler hat as a playful variation on the motor cap. Something glossy will look commanding and give you that ASOS-recommended shine. If you prefer humblers hats, find a cotton Brixton. It’s basically the same thing.

Last year, a few models stumbled across the revelation that is corsets worn as a top layer. The look blew up when Forever 21 instagrammed one of their models wearing one in Milan. Now hundreds of girls are wearing corsets around like waistcoats. The look has a neo-Gothic, fantasy feel to it. It isn’t comfy, but since when were fashionistas worried about comfort? The piece is already gaining popularity with retailers. You can bet it’s going to be a big accessory item in 2017.

Women started taking over traditional men’s fashion trends in 2016. The women of Hollywood used their red carpet outfits to demonstrate the trend was here to stay. The pantsuit has graduated from a political statement to fashion that can actually be sexy. Just look at Evan Rachel Wood and Octavia Spencer at the Golden Globes. We’re still waiting for NYFW to make good use of the pantsuit on its runway. Popular culture must carry the torch for this trend until the fashion world catches up.

There will be more lists. As the Spring 2017 runways reveal what else you should be wearing, we’ll keep you informed. For now, these are the fashion trends to follow. Get out there and make a splash.