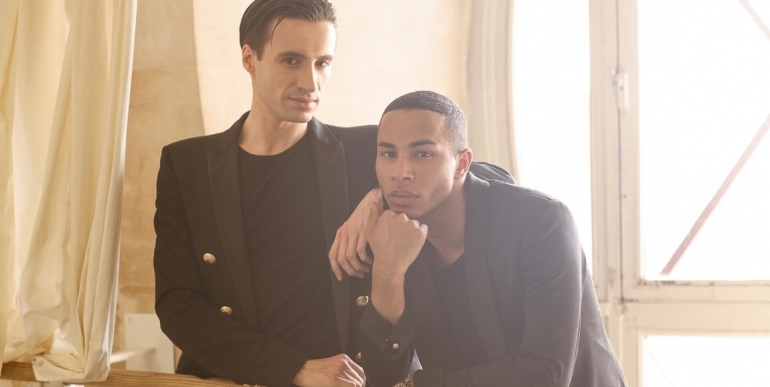 Pierre Balmain was a man of elaborate aesthetic sense. In an era dominated by names like Coco Chanel and Christian Dior, this Frenchman forged a name for himself as the designer behind icons like Ava Gardner and Brigitte Bardot. After his death in 1982, his luxury brand continued under many capable men including the man famous for dressing Jacqueline Kennedy, Oscar de la Renta. Now it rests in the talented hands of Olivier Rousteing, a fresh voice whose focus seems to be searching for new arenas where the Balmain name can shine. To find his new aesthetic, Rousteing has looked both beyond the borders of France to Japan and Korea and deep in the culture core of his artistic city. One such excursion inward led to this year’s Balmain ballet, a 27-minute dance piece with costumes by the ever-inventive Olivier. Here’s what we like best about his costumes so far.

It’s an interesting moment in fashion history for a top tier designer to be designed ballet costumes for flexible dancers. With the industry’s recent focus on athleisure and function-savvy clothing, many designers are experimenting with elastic materials and movement-friendly designs. Rousteing’s glittering leotards and pearly tops further this new trend to allow choreographer Sébastien Bertaud’s dancers the liberty to move with flair.

Balmain is known for their detailed approach to fashion. The brand has been making delicate, bejeweled apparel since its birth in the mid-40s. This tradition is carried on in the Balmain ballet through a series of pearl-studded “jackets” and embroidered trousers. The combination of luxury couture and loose-fitting fabric makes for a beautiful collection, creating a savvy way for Rousteing to play with different textures and techniques in his designs.

No need to shy away from the obvious. While all professional classical dancers slip into seductive tights all the time, the designer hints on these stretchy trousers draw out the sexy outline of each performer’s muscular build. Adorned with a glistening silver pattern and soft, tulle-like fabric wrapped about the chest, it feels simultaneously exotic and intentionally risqué. They say simple is almost always better. In this case, it’s significantly more alluring too.

Rousteing’s intricate detail work draws out the flighty fierceness of the Parisian ballet performers. His jacket, while bejeweled and strung with small pearls, still gives off the power of a matador’s costume. When whisked about gracefully on a stage, it flashes with a combination of luxury and modern eccentricity. Other pieces from the collection are the same. Rousteing’s genius is in combining fabrics, accessories, and culture into one beautiful outfit. It’s engaging to look at resting still and seductive when worn by an active dancer.

To craft costumes that would work well on stage, Rousteing worked closely with Bertaud and his team of dancers. These photos are from the collaborator’s first fitting session where the initial costume designs were tested out with some of the key choreography. All the greatest behind-the-scenes partnerships in theater are by nature collaborative. Developing a joint concept from scratch takes time and the clarity you discover together grows over time as you learn and watch things happen. There are sure to be more fittings and adjustments in the future on the way to this ballet’s early fall debut.

No one will mistake Balmain’s ballet costumes for runway outfits. Though they’re not your typical dancing clothes, they have a pronounced balletic quality to them. This is part of their draw. The combination of two specific styles of dress echoes the true marriage of fashion and ballet embodied by Rousteing’s work. It’s an exciting time for both industries.

The Balmain ballet may not debut for a few months yet, but the buzz is already starting. With more fittings and production photos to come, stay tuned to see how the project develops. Turns out ballet should be on your list of fashion trends to keep an eye on this fall.