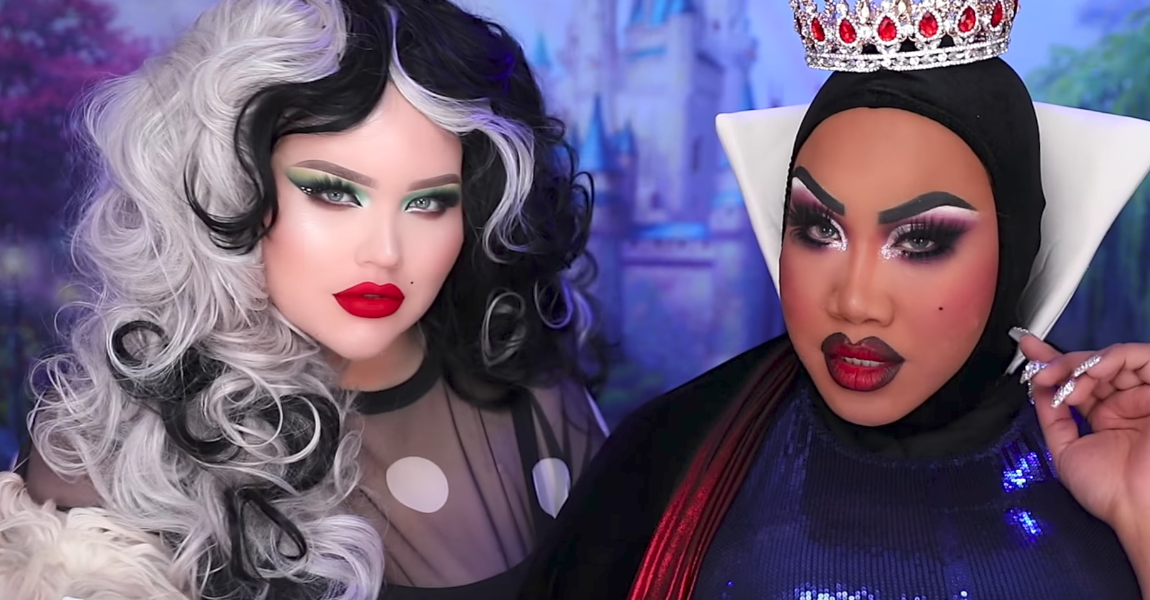 When you were a little kid, did you dress up as a Disney character to go trick-or-treating on Halloween? You may have tried out a Minnie Mouse dress, or channeled your favorite princess for your pretty look. But as an adult, one fun way to mix spooky looks with your childhood nostalgia is to score makeup and costume inspirations from Disney villains. Below, we’re rounding up the best Disney villain Halloween makeup tutorial videos and images to ever hit social media.

Some of our favorite influencers, Nikkie Tutorials and Patrick Starrr, are killing it as far as their Disney costumes are concerned. This year, the makeup YouTubers rocked Cruella de Vil and Evil Queen looks.

Always wanted to see DISNEY VILLAINS get ready and do their makeup?? 😏🔮✨ watch @patrickstarrr and I transform into The Evil Queen and Cruella De Vil 😈 watch the video now! 👉🏻 LINK IN BIO!!! – who is YOUR favorite Disney villain?? Comment down below!! ____ #nikkietutorials

Luckily, they spilled the behind-the-scenes, step-by-step instructions from their collaboration on how to get this glam. To see how these artists crafted their elaborate looks, check out their full makeup tutorial video below.

Ever since Maleficent got her own Disney movie back in 2014, she has become more popular than ever in terms of Halloween inspiration. YouTuber Kandee Johnson was one of the first major influencers to tackle the makeup trend at that time.

If you’re inspired by Angelina Jolie’s movie character specifically, YouTuber Chrisspy showed us how you can go all out with the use of prosthetic cheeks to sculpt Maleficent’s angular face.

Makeup artist Audrey Logeais is the master of cosplay-level makeup. This blue Hades look shared on Instagram is Halloween makeup to Herculean proportions.

This incredible tutorial video from YouTuber KlairedelysArt shows you how to get the character’s cool blue hair along with his glowing yellow eyes.

Ursula from The Little Mermaid

One of the most popular villains out there is definitely everyone’s favorite purple sea witch, Ursula. Makeup artists have transformed themselves into several different versions of the classic movie villain.

YouTuber dope1111 transformed her entire video set into an under-the-sea cove when filming her Ursula costume and makeup tutorial.

Artist ilonaorsbornmua actually gave Ursula a mini comic book makeover, defining her exaggerated features with graphic black lines. We can’t believe this is a real person and not a painting!

Meanwhile, YouTuber JaaackJack showed us how you can add some major glitter into your Ursula ensemble. Hey, villains can have their sparkly moments too!

The Evil Witch from Snow White

Witches are one of the most classic Halloween costumes out there, but the Evil Witch from Snow White – you know, the one who poisoned the princess with her magical apple – is a fun twist on the style. We love how makeup artist Lacey Noel re-created the witch’s wart-topped nose and sunken-in eyes.

DAY 69 OF MY #100DAYSOFMAKEUPCHALLENGE! "One bite, and all your dreams will come true…" 🍎🍎🍎✨If I'm going to do the Evil Queen, of course I'm gonna do The Witch! Plus, is it just me, or is she totally cute?! I love her tooth, lol! 🍎✨ • Photo by @missmissyphoto 🍎✨ • I used various @mehronmakeup Paradise paints, and the white starblend powder. 🍎 • I also used @katvondbeauty Shade Light palettes for contour. 🍎✨ • I used @toofaced Melt into Spring for the nose, too! 🍎✨ • #transformation #makeupoftheday #sfxmakeupartist #100daysofmakeup #sfx #oldhag #evilqueen #thewitch #halloween #halloweenmakeup #disneybound #disneyland #disney #disneycosplay #snowwhite #katvondbeauty #makeupartist #makeupforever #smashbox #bodypaint #toofaced #mehron #nyxcosmetics #tarte #beautylish #sephora

Scar from The Lion King

Animal costumes like lions are always trendy – but you can give your ferocious look an evil streak… in the form of an eye scar.

Makeup artist Tiana shows how you can draw out a feline face in great detail.

If you are hoping to win a “Most Creative Costume” at a Halloween party this year, you’ll love stealing some style inspiration from Captain Hook. Elevate your classic pirate costume by painting the Tick Tock Crocodile onto your arms in green body paint, like YouTuber Kat Sketch cleverly shows us in this tutorial video.

There are clearly so many incredible Disney villains out there, it will be quite an ordeal to pick a favorite makeup look out of these!