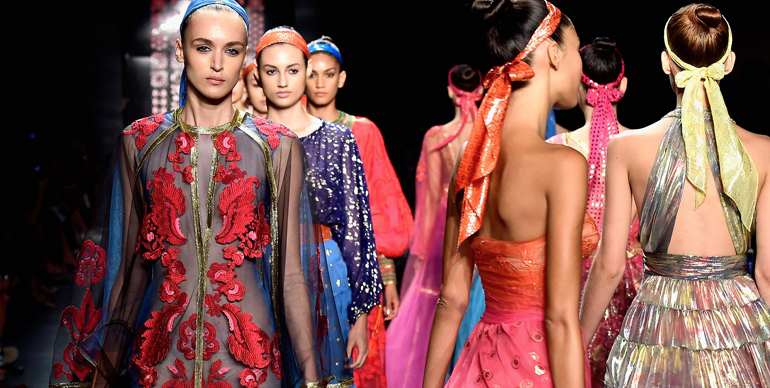 Fashion week is a great time to get acquainted with new faces. Of course, you go to ogle John Galliano’s latest designs or applaud the newest incarnation of Americana from Ralph Lauren, but in between big name spectacles there’s typically a new or two you love but have never heard. These at the newbies, hard-working dreamers who sewed, draped, and cut their way to a chance at the big time. Every year, a few lucky first-timers get to rule the runway alongside fashion heavyweights that have been at NYFW since there was a NYFW to be at. Here are the freshmen designers you need to keep an eye out for this week. Judging by their diverse talents, the future of fashion is very bright indeed.

'7 Up-and-Coming Designers on What It Means to Be an Original in Fashion Right Now' for Vogue.com @voguerunway ft. Maisie. Thank you!! Photographed by @benmorrisphoto

He made Vogue’s list of up-and-comers to watch and wowed Rihanna with his unique take on American style. Now, he’s making his NYFW runway debut. Born in Massachusetts, trained in Sydney, and taught in rural Japan and Switzerland, Dolan has an eclectic past to draw from for his designs. If you’re lucky enough to get into this show, you may well be watching history in the making.

In 2016, Vogue declared that this little Australian brand was the epitome of “come as you wish you could be.” Daisy’s skimpy cowhide miniskirts and grungy baby doll dresses won the day back then and helped the company gain enough traction to get to New York for fashion week this September. Get ready for a 90s collection full of empty fantasy and glorious nearly-goth attire. What’s not to love?

Lou Dallas is the label founded by artist Raffaella Hanley years back in 2013. Her neo-baroque style is a phantasmagorical celebration of the past and the present, high culture mixed with low. We’re thrilled to finally see her taking the runway this fall with whip-stitched frocks, shambolic headdresses, and a wonderful amount of sequins. If you’re in Manhattan this week, make sure you check out her garb.

Cut, twist, pinch, and tie up. These are the four rules that guide fresh designer Snow Xue Gao in her critically acclaimed boutique collections. Though she only just debuted her eponymous brand at Parsons last season, people are already hailing her as an expert in exaggerated proportions, asymmetrical finishes, and androgynous design. Judging from her previous work, you’re in for a runway full of unconventional officewear this week. One of those rare reasons to actually get excited about corporate life.

Victor Barragán is the pop culture designer of the contemporary fashion world. His first big success was a t-shirt featuring Leonardo DiCaprio crying tears made of MS-DOS folders. Can you think of anything more 90s-nostalgia-meets-the-aughts? With dozens more impressive designs which pay homage to the 00s and a few revealing outfits racier than the one above, we’re confident Barragán’s NYFW debut will be a smash hit.

Fashion designer Raul Solis is beyond versatile in scope. His designs for label LRS are at once distinctly vintage and modern, niche and yet approachable. To Solis, each outfit is a chance to combine wearable fashion with something uniquely conceptual, dare we say following in the footsteps of greats like Vivienne Woodward and John Galliano. Prepare to be impressed by him this week.