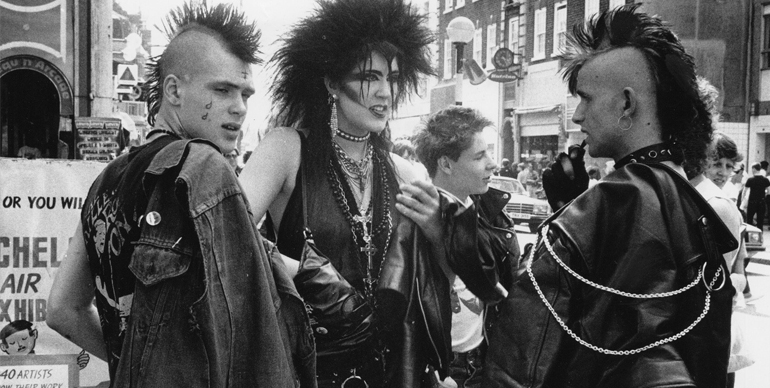 Fashion spawned from cultural shifts is inescapable. What we want to communicate about ourselves is hidden in what we wear. When you look in the mirror every morning, you’re secretly critiquing what your clothes say about you. Sexy? Studious? Naughty? Cool? When society has a revolution of conscience, people are even more aware of what they wear. Usually, fashion becomes a reaction. We feel the need to wear clothes that say “This is what I think!” or “I definitely don’t think that!” It’s happening this winter. In light of recent events, a pink hat knit to look like a cat is now the stocking cap of choice for 2017. If you’re discontent with something, you try to draw attention to changing it. Some of history’s most iconic fashion trends were inspired by active political movements. Here are the most notable examples.

Women gained the right to vote in 1920. Three years later, they wrote the first Equal Rights Amendment and proposed to Congress. By the late 1920s, women’s rights were becoming an undeniable force in popular culture. The 20s was already a decade of speakeasies and ‘loose morals.’ With women’s rights coming to a head, change was inevitable. Since women were the force behind most of this cultural upheaval, the fashion world decided to help these newly-liberated females. For years, dresses had been fashioned stiff and snug with corsets for extra modesty.

Now, designers started introducing looser dresses. These new gowns sagged in all the right places and had shorter hemlines to show off more of the female figure. The infamous Flappers, young women who swung the night away and smoked 24/7, ditched their stockings and flaunted their ankles. (It may sound trivial now, but to 20s crowds, nude ankles were horribly scandalous.) This trend toward showing more skin backtracked during the Great Depression and World War II, but it was back by late 1950s. Enter: the miniskirt.

The miniskirt may have debuted in the late 1950s, it didn’t become trendy until the 60s. The 60s were an interesting decade for women. Taboos like birth control were becoming commonplace. More women were branching out, planning careers, claiming their independence. The fashion industry seized this opportunity to design women something more liberating than naked ankles. The miniskirt started as a sci-fi trend in films like Forbidden Planet.

It wasn’t until British designer Mary Quant raised hemlines at her London boutique that the miniskirt became fashionable. It was the first futuristic style transformed into modern workwear fashion. The miniskirt also seemed to be what designers came up with after asking what liberation would look like in a dress. There can be no doubt miniskirts were a politically-fueled fashion trend. It’s easy to forget how offensive they were in their hey-day. Wearing a miniskirt in the 1960s was more of a political act than a fashion statement. Remember that next time your drooling over Goldie Hawn.

People say hippie romanticism died after the Manson murders, but the subculture had a huge impact on iconic 70s fashion. It wasn’t a nice decade. People wanted a way to state their discontent. The simple, rustic designs and psychedelic colors of 60s subculture seemed the perfect way to counter war with peace and corruption with individual expression. Most artists of the day were revolutionaries and emphasized the importance of ‘expressing yourself’ in what you wore.

Fashion became about personal taste. You wore the color that looked best on you or the logo that showed how you felt about life. It was the first moment in fashion history when people were encouraged to wear outfits because they meant something personal. The movement stuck. Its best looks are still worn today. The hippie trends of the 70s teach that when you want things to be different, you say so. Your voice matters. Fashion can be powerful.

Punk subculture grew out of discontent. The movement began in industrial communities in and around London. It was a youth movement against what they saw as a bleak future under Thatcherism. In the factory communities of England, punk’s signature steel-toed boots and leather jackets weren’t revolutionary. These were necessary outfits in every working man’s wardrobe. It was the metal studs, piercings, and spiky hair added by sharp-eyed designers like Vivienne Westwood that defined the ‘punks.’

When the trend spread in the mid-80s, the iconic boots and jackets traveled with it and took on a whole new significance. Once again, leather became a material of choice for societal pariahs and rebellious teens. Punk fashion never crossed over into mainstream fashion the way miniskirts or hippie culture did, but it made things like piercings and spiky hair less taboo. It also endured. There are plenty of spin-off subcultures that can trace their roots back to these original 80s badasses.

Some of the most iconic fashion trends were also cultural movements. It makes us wonder, what’s next?