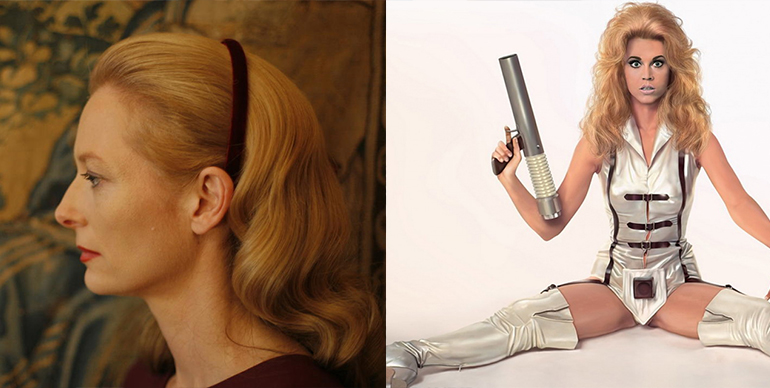 It shouldn’t come as a huge surprise to learn many of cinema’s most iconic wardrobes were crafted by fashion designers. You could make the argument costumers and fashion designers fall under the same classification as general makers of clothing. We won’t stir up that debate though. We’re more interested in looking at how runway designers translated their unique talents into the Hollywood film industry. We’re all familiar with the reverse of this trend, catwalks populated with film-inspired collections like Rodarte’s ode to Star Wars or Rad Simons homage to David Lynch. So, who took their couture aesthetics and fused them into the environment of an onscreen world? It’s time to find out. Put your movie-lover hat on and join us on a journey through the history of fashionable films. The level of fame involved in this unusual phenomenon will knock your socks clear off.

Many a famous director has asked Mssr. Gaultier to lend his French hand to their films, but he has only sufficed a few times. It was his fourth film, Luc Besson’s unforgettable The Fifth Element, which finally earned him a reputation as one of Hollywood’s finest. Demonstrating a sharp attention to detail and aggressive storytelling ability, Jean-Paul created over 1000 costumes to enhance the 23rd-century world Besson had dreamt up. Bruce Willis and Gary Oldman have never looked more futuristic chic since.

It still seems a bit unbelievable that the great Saint Laurent would deign to costume a film, but he certainly infused surrealist Luis Buñuel’s Belle Du Jour with mod-60s majesty. The tale of a bored housewife who spends the afternoon work at a high-class brothel, this stylish movie allowed Yves to experiment with public and private attire. Boxy, cropped jackets, knee skirts, and pristine lace lingerie all played a role in this revolutionary piece of cinema, one of the first to honestly explore female sexuality.

One of those modern art films that harkens back to what some would call the good old days, Luca Guadagnino’s I Am Love featured a ravishing Tilda Swinton done up in some of Simons most colorful work during his tenure with Jil Sanders. The wardrobe’s storytelling is on point. Swinton’s character dresses in muted colors until her reawakening – an affair with a young chef. It’s rare to see sartorial skills this adept at portraying a character arc.

It was the dawn of space-age fashion in cinema and a late entry in the feminist and true-love cannon. That’s about all this troubling film has going for it. Essentially, the iconic costumes of Rabanne salvaged what could have been a total disaster by making the weak script and bad acting in Barbarella empowering and interesting to look at. We’re serious. Please don’t watch this film for vintage fashion inspirations. Visit the clothes when they’re on exhibit and save yourself the disgrace.

Really, Buz Luhrmann’s Romeo+Juliet featured work from numerous big name designers. Valentino helped dress the rich Montagues’ style and Dolce & Gabbana worked their magic on the Capulet boys. Miuccia Prada was left to clothe Shakespeare’s ill-fated lovers. She went for gold, designing those iconic wings for young Claire Danes, Leo’s romantic suit of armor, and later the navy suit he wore to marry his bride. Tackling the costumes for such an eclectic film is no simple task. We’re pleased Prada and company did their job so well.

Even Patrick Bateman can’t compete with the narcissistic, image-obsessed yuppie portrayed by Richard Gere in Paul Schrader’s classic American Gigolo. And who better to assemble a high-class wardrobe that epitomized the materialism of 1980s America than businessman vintage star Giorgio Armani. You get it all in this flick – relaxed tailored suits, Mackintosh-style overcoats, and the questionable short-sleeved dress shirt. If you need a guide to corporate 80s clothing, this is the film you’ve been looking for.

While Karl Lagerfeld did some excellent work on the controversial Maîtresse in 1975, it was the original Coco Chanel who conquered Hollywood. She did her damage in the 1930s alongside friends Samuel Goldwyn and Samuel Goldwyn Mayer. Though Coco’s career as a costume designer for MGM spanned the heart of cinema’s Golden Age, it was her return in 1961 for Last Year in Marienbad that truly immortalized Chanel fashion for the screen. Much like Armani’s work on Gigolo, Coco worked her whole cannon into the wardrobe of actress Delphine Seyrig, including the LBD.

Perhaps it’s paradoxical to say, but fashionable Hollywood wardrobes have nothing on the costumes crafted by famous fashion designers. These films may not be cinema’s best in terms of storytelling, but they’re goldmines if you’re a classically-inclined fashionista. Have a movie night with one or two for the fun of it. You just might find your next outfit immortalized on one of cinema’s biggest stars.