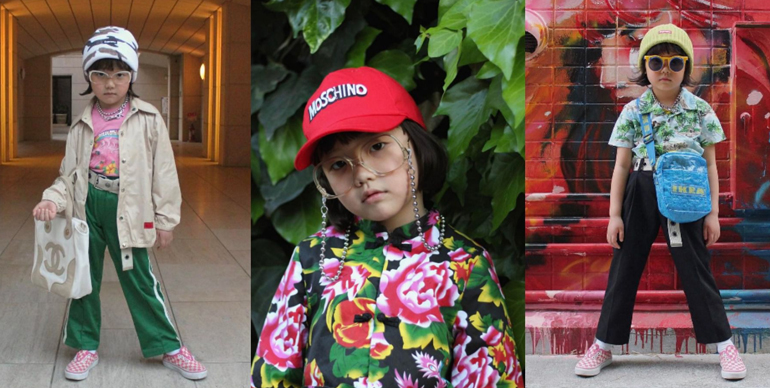 Pint-sized hipsters are growing more and more common thanks to social media. Back in the day, they only existed on gaudy calendars and the occasional niche poster. Now, kids are taking over Instagram like it was invented just for them. Of course, these little starlets are the product of their parents’ ambitions, but that doesn’t make their feeds any less cute or their wardrobes out of style. In fact, these parents seem to have an acute sense of fashion in the present age and manage to dress their toddlers better than many of your adult fashion icons. Just look at Coco Pink Princess, one Instagram’s most prolific micro-fashionistas. Always adorned in haute couture outfits and gaudy accessories, she’s a layering genius and with a sassy confidence you’d think could only be learned in high school. Give her account a follow and let the looks worn by this little princess of fashion guide you to style brilliance.

Way back in 2015, Coco made her Instagram debut in this decadent dress. Clearly, she knew florals were a thing well before they took over on the runway.

Coco Pink Princess was an early champion of athleisure, sporting casual Nike attire months before athletic wear became cool. She also seems to have a thing for M&Ms. After all, don’t we all?

Just like the legendary Coco Chanel, little Coco Pink loves a good hat. This one from a few years ago is one of our favorites. Just look at those playful leopard print-patterned pink blotches.

Rarely does micro-fashion achieve this blend of adorableness and style. Coco may not be flaunting her Gucci in this early post, but that confident stance is a charming sign of things to come.

While most five-year-olds grin ear to ear for photos, Coco is perfecting the art of more sophisticated expressions. And, of course, the casual leg cross.

Last year’s food-inspired fashion craze wasn’t lost on Coco. She’s even toying with the 90s in this baggy top and beaded necklace. Also, take note of those sunglasses. They’ve become a staple in the Pink Princess wardrobe.

By the fall of 2016, Coco was stepping out of kid fashion clothes and into real design outfits. Her swagger was getting better too. This is the first hint of the personality her followers have come to love.

Coco Pink Princess may wear big name brands like Gucci, but she’s also tapped into selective markets like Supreme. We never thought we’d say it, but turns out a 6-year-old can pull of niche hipster style just as well as a rebellious 20-something.

Modern florals mixed with trendy 80s track pants and a Hefner bunny bag is almost too much to handle in micro-fashion. Coco still manages to pull it off with style, but you can’t help but wonder if she’s growing up faster than she should.

Stocking caps and baseball caps have been Pink Princess fashion pieces since the beginning, but recently this little fashionista is turning to handbags. Odds are, she’s one-upping you with her purses.

If any photo sums up the journey of Pink Princess from young stylish kid to micro-fashion aficionado, it’s this shot of her glamming it up in Gucci. With those rockstar glasses and athletic socks, she’s flaunting the best of every 2017 trend like nobody’s business.

You should envy Coco Pink Princess just a little bit. Her micro-fashion is truly incredible and she’s probably beating you in at least one category if not more. They say kids say the darndest things. Coco proves they wear the darndest things too.