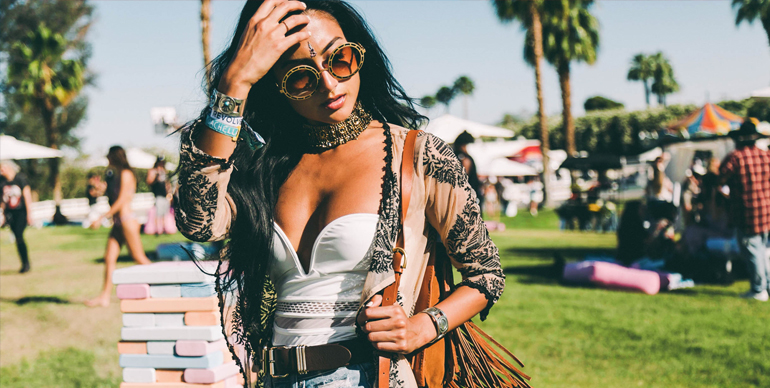 The first week of Coachella handed us a snazzy collection of unexpected beauty trends. Blame the hipster-populated festival for glitter roots and thank it for demonstrating how metallic makeup works in a naturalistic context. Now, the festival is nearly into its second weekend. Time to have a closer look at some uniquely Coachella-inspired fashion pieces. Like its gaudy beauty looks, this festival isn’t afraid to bring out the strange and wonderful in summer fashion. What you’re about to see isn’t fashion for the traditional or the timid. These are wild outfits that will cause a stir. If you want to add some romp to your summer wardrobe for 2017, Coachella fashion trends are the perfect answer.

If you think about it, Gucci is the last designer you’d expect to see at an outdoor music festival. A die-hard Italian company since its birth in 1921, this brand has made a name for itself with high-end purses and formal suits and dresses. At Coachella 2017, all refined boundaries are crossed. Dozens of trendy bands hopped up on the stage decked out in floral print button-downs and trendy black slacks. Even Rihanna complemented her dazzling bodysuit with a tattered Gucci tank top and cutoffs. It seems the sophisticated labels are mixing with hipster and streetwear fashion in today’s fashion world. If things go well, maybe they’ll lower their prices too.

Whether broadcasting the names of recognized designers or touting a catchy slogan or two, skivvies took on a new personality for Coachella fashion 2017. Always a popular top when it comes to music festivals, these elastic bra straps are usually monochromatic and insignificant. They’re supposed to be like belts, plain and function so they didn’t distract from the elaborate bras and glittery hair people should be staring at. Not this year. In 2017, your skivvies and belts should advertise your favorite brands and sayings. It’s like literary caution tape. The elastic will be a great conversation starter and if you’re smart, help you sift through the crowd a little to find the right attention.

Yup. You read that right. Coachella fashion has always been obsessed with feathers and unconventional hairdos, and this year some of the VIPs went all out in classic Native American style. These re-invented headpieces ranged from feather-crested straw hats to full-on Western headdresses with long trains and thousands of feathers. It often seemed a bit strange to have ladies in halter-tops and cutoffs lounging about in heavy headgear. During the day, the hats might have compensated for their weight with some shade, but in the evening, they were simply an extravagance. Don’t try this trend out unless you’re ready for a sweat.

After Carrie Fischer’s death late last year, the Princess Leia space bun had a short moment in the fashion beauty spotlight. This summer, it’s back with renewed energy and a lot more glitter. The Coachella fashion version of this iconic Star Wars hairdo features two buns pointing up from the top of your head, rather than extending out on the sides. With their spiral-like structure and antenna placement, Coachella space buns seem even more deserving of their name than the original look. If you’re a unicorn beauty guru, spread some glitter down your center part to give this look extra color and spark.

In a surprise combination of high-end Japanese style and Hollywood subculture, the silk bathrobe became a favorite after-hours outfit in the Coachella fashion wardrobe. Though it isn’t surprising to find fans of The Dude at music festivals across the United States, Jeff Bridges’ titular stoner hero seems to have taken on mainstream allure at Coachella 2017. Everyone from festival first-timers to Sean Combs was giving this epic outfit a try. Maybe this is the year you can finally shop in your favorite bathrobe.

Coachella fashion is always a hoot and this year’s offerings are no different. From Lebowski style to Gucci rockstars, there’s something for every type of edgy on this list. Get ready for a wild summer!