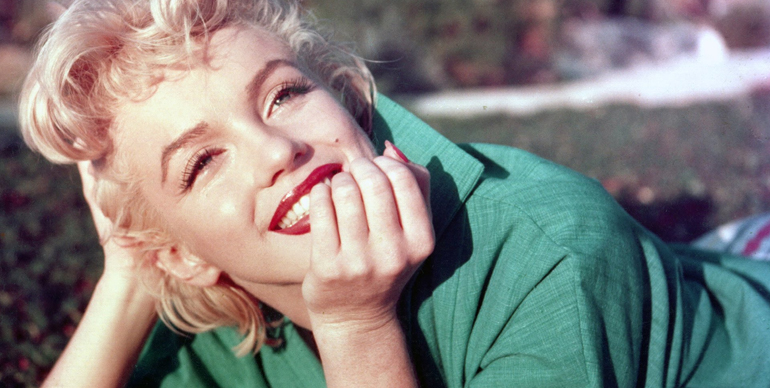 You know their names and faces from history. We’ve counted down iconic dresses they’ve worn, unmistakable films from their careers, and even saved you a few memorable quotes. However, we’ve been saving the best Golden Age legacy for last. These sirens of the screen didn’t make a name for themselves settling for natural beauty. Each one had a few DIY tricks up her sleeve, some you can easily use in your daily routine and a few you’d never dream a modern fashionista could muster the courage to endure much less one from decades ago.  So, what did these fascinating ladies do to maintain immortal complexions for the cameras? That’s what you’re about to find out. It’s time you stopped admiring the fairest in the land and start trying to evoke their magical sexiness on your everyday face.

When it came to lip color, Monroe was especially demanding. She had her makeup artist apply 5 different shades daily to create shine and dimension. Guess you don’t go down in history as the sexiest woman of all time without hard work.

Liz owes more than just a career-defining role to ancient queen Cleopatra. When her skin began to lose its shimmer, Taylor turned to the Egyptian custom of face shaving. Reportedly, a light going over with the razor removes surface layer skin cells to create a facial-like glow.

Are you one to stare at Hepburn’s luscious Bambi lashes with covetous envy? You might stop wishing if you knew the painstaking efforts it took to create such a look. After applying mascara, she’d use a pin to separate each individual lash. Still hungry for those flawless lashes now?

They say she was the queen of contouring. Before Kim Kardashian and all that nonsense, Miss Kelly was using precise blush to define her cheekbones. One shade underneath and another on the apples sure made for a memorable complexion.

If you take a close look Leigh’s beauty hack is visible. Insecure about her thin bottom lip, this sultry star used extra liner to draw outside her natural lip shape so she could have a larger pout. Now you know where Scarlett O’Hara’s famed fat lip came from.

Marlene was so concerned with her facial features she had her molars removed to accentuate those cheekbones and used surgical tape to sustain an artificial facelift. If you’re on the verge of going this far in the name of vanity, please reconsider.

Wavy red hair was the ticket to fame for Miss Hayworth. To keep her tresses in top shape, she applied oil to her locks after every wash. After letting things soak for 15 minutes, she rinsed with hot water and lemon juice to remove any excess residue.

In the age of silent pictures, everyone knew the iconic eyes of Garbo. She helped their reputation with a thin layer of petroleum jelly on top and dark charcoal pigment underneath. Few eye makeup regimens since have look this theatrical.

A Mediterranean girl at heart, Loren’s elixir of magic was olive oil. She used it all over to keep her skin soft and hair glossy. Your improved beauty look could be just a grocery store trip away.

Bette Davis eyes aren’t just a lyrical device made famous by Kim Carnes. Before New Wave music existed, the real-life Davis caused a stir with her flawless pupils. Her DIY trick? Cucumbers on the lids at night and petroleum jelly to combat dark circles in the morning.

Old school Hollywood stars are more than pretty models to look at. They’re expert beauticians who perfected the art of primping for the camera. You may never be a movie star, but with these tried-and-true hacks, you can start to look like one.