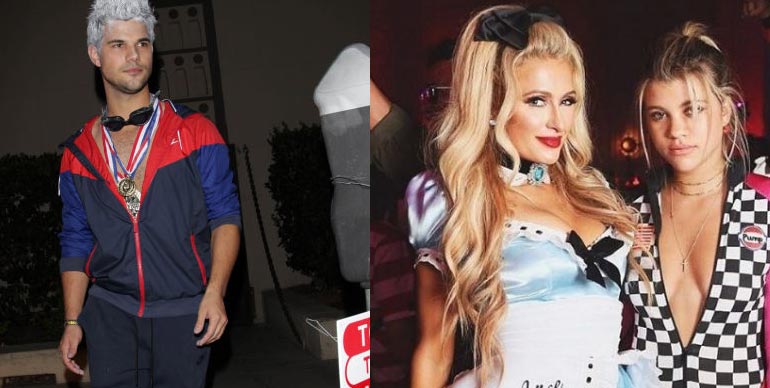 Time for some positive Halloween celebration with the best celebrity Halloween costumes of 2016! There have been many things written about the bad Halloween fashion and horrible costumes. From embarrassing costumes to celebrity fails, the world loves to hate on Halloweens gone bad. Let’s switch it around and look at the best costumes celebrities wore this year. Celebrity costume ideas may be elaborate and beyond your pay grade, but you can still admire them. Halloween 2016 was a blast in Hollywood and NYC. The following gallery is why.

Medals, goggles, and of course, that infamous bleached hair.

PARIS HILTON as ALICE IN WONDERLAND

Alice didn’t have that bust, but it was a nice near-cute attempt.

Oh, Martha. You tried. Actually, with the wig and the lipstick, it wasn’t that bad an impression.

Hepburn wasn’t drinking Starbucks or beer in her tiara, but I guess even Holly needs a 21st-century boost.

Yes! Finally, a 90s throwback that isn’t cheesy or pathetic. This may be the only time I ever say this, but well done Khloe.

So, if Cleopatra came back today, this is what she would wear… According to Emily Ratajkowski.

ELLE FANNING as a FAIRY

Elle only gets a year or two more of getting away with adorableness. But this was adorable.

She had the bike and everything. I can’t decide if I should say ‘Try harder,” or ‘Nice one,” though.

This mask was on point. Why doesn’t Katy just hijack the Presidency?

HALLE BERRY as a SKELETON

A baby Skeleton came along too, but it was more freaky than cute, don’t you agree?

Does it get more adorable than this? He wasn’t even born in the 80s and he’s dressing up like Back to the Future.

From the pigtails to the bomber jacket, this was a winning look. Breslin, you go girl!

Heidi Klum was more cartoonish, but Ambrosio sure was drop-dead sexy.

MARIAH CAREY as THE DEVIL

Beware the wrath of the R&B star. Mariah’s costume can still unleash hell with a small three-prong wand.

I would not have pegged him as a Luigi guy. Apparently, Luigi can DJ like a boss.

Now there’s a Mario. He did the dance perfectly too.

SHANE WEST as HALF SKELETON

Someone did an awesome makeup job on this dude. Menacing as hell.

Thank you, Halloween 2016! It wasn’t a bad year for costumes of celebrities. Halloween fashion isn’t dead yet. Just a little mummified. Well, we’ve had our fun. Now, on to the turkey and the Christmas tree.