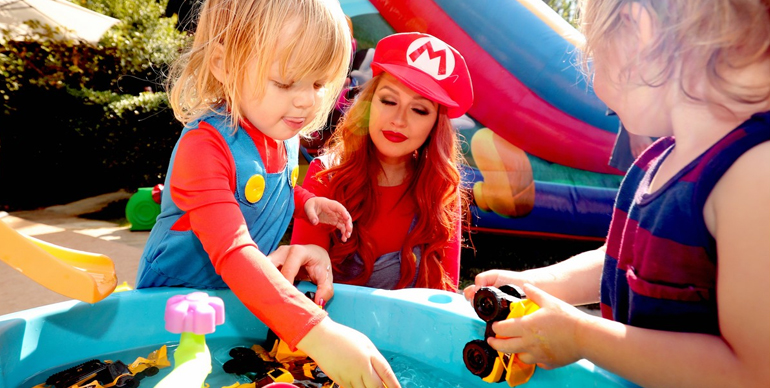 When your parents are loaded, odds are you’ll get some pretty epic birthday parties, especially during those adorable years before you become a rebellious teen. Think about it. There’s plenty of money to spare and it’s genuinely hard to say no to two glistening little eyes peering up at you hopefully from below. The pressure intensifies when you’re a celebrity parent. If the spotlight is always on you, saying no means denying your pleading child their wishes and facing public scrutiny from who knows how many detractors and judgmental fans. We’re not condoning bowing to peer pressure, but wouldn’t you rather just give the little one a birthday bash for the ages? Regardless of the behind-the-scenes drama, here are some of our favorite celebrity kids’ birthday parties for you to covet and enjoy. Let the festivities begin!

When it came time for Kourtney Kardashian’s little starlet to turn five, the family planned a worthy bash with just enough over-the-top surprises to keep little Penelope on her toes. Still, once the confetti settled, her favorite part of the whole celebration was the gigantic balloons. Just goes to show tried-and-true party decorations are a perennial hit for a reason.

This Disney-themed celebrity birthday party has us wanting to burst out in song to one of Lin Manuel Miranda’s catchy Moana tunes. It’s about time this recent film started making the rounds at birthday parties. Another thing we love about Simpson’s approach is how simple and down-to-earth it feels. You don’t need epic scenery and perfect costumes for a theme party. Your child’s imagination will be more than happy to fill in the blanks.

What’s better than a birthday party with lots and lots of cake? A celebration flooded by adorable cupcakes! When Suri Cruise turned ten earlier this year, Katie Holmes decorated the refreshment table with stacks of little cakes covered in pastel pink frosting. What a delicious way to make your growing kid feel super hip and assure there’s enough food for everyone.

She’s had her share of lapses in judgment as a parent, but when it came time for her sons’ joint birthday party Spears was a super mom. This celebratory spread is a boy’s birthday dream with two epic cakes and colorful Pokémon-themed extras. Celebrity kids’ birthday parties tend to go by the maxim ‘Go big or go home,’ but when you live in a mansion like Britney, you get the best of both worlds. You go big and stay home.

When you’re Kim and Kanye, a birthday at Disneyland looks a little different than the typical family getaway. This couple rented out parts of the park for North West’s third birthday, creating an extra magical atmosphere for her and her little guests. Ultimately, it was these little animals that held the young West’s attention the longest. Wouldn’t you prefer a conversation with Thumper and his friends over a dizzying roller coaster?

First birthdays are usually all about the cake. After only a year on earth, there’s not much more to get personally excited for. Legend and his partner Chrissy Teigen knew this well when they ordered this cute beauty of a cake for their little Luna. Tall but not too tall, look at this as proof that some celebs know when to keep things to a minimum.

For her fourth birthday, Blue Ivy got to prance around the obstacle course of a fairy tale land and shoot arrows at targets while wearing a tiara. Really, we’d expect nothing less from supermom Queen Bey. When you can teach your daughter recreational sports and female empowerment on her big day, you’re doing something right.

Celebrity birthday parties are diverse, extravagant, and memorable. Borrow a few ideas from your favorite celebrations to try out the next time a precious little angel in your life gets older. There are plenty of ways to retain a spark of festive luxury, rich celebrity or not.