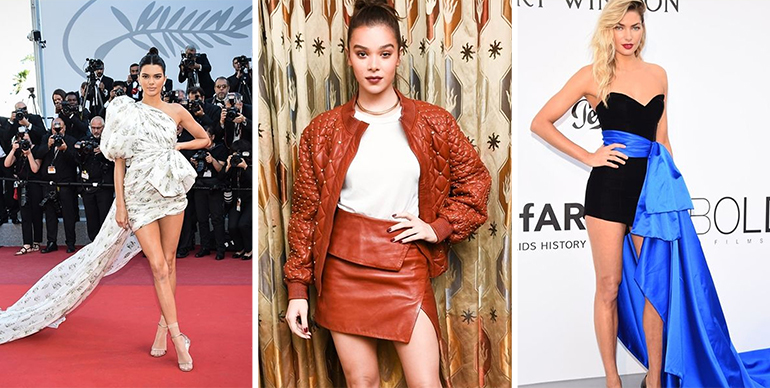 By the end of 2016, it was clear the 80s comeback that began at NYFW in the fall of 2015 was no fluke. Like it or not, the decade that gave us yuppies, Ronald Reagan, and The Breakfast Club was taking over culture once again. By now, you’ve probably read your fill of advisory lists reminding you what vintage styles you need to be shopping for and which embarrassing trends to avoid at all costs. We’re not going to do that again, though we can think of plenty to warn you about. Instead, let’s look at some modern red carpet queens and see how they’re adapting to this insurgence of fashionable nostalgia. From glitter eye makeup galore to full-shouldered businesswoman power, here’s what celebrities think constitutes an appropriately 80s-inspired wardrobe. Be prepared for some of the classiest throwbacks you’ve ever seen.

Forget denim on denim. Before you get swept away by the fanatical 90s renaissance, pause for a moment and consider this look. It’s classy, infused with sophisticated Western chic vibes, and works just about anywhere. Isn’t that all you can ask of Americana fashion in 2017?

This is one of those unexplainable fads that should never have worked but somehow managed to find a following. Don’t let its celebrity popularity fool you. A catsuit is acceptable once at a particularly edgy soiree. No matter how much you love the idea, it does not belong at formal occasions. I mean, we love it, but Emily Ratajkowski only just pulled it off on the red carpet.

Waltzing into a rave wearing neon sneakers and a highlighter orange tank top isn’t notable anymore. The way to make neon stand out in 2017 is to wear it confidently to a formal dinner party. If there’s some hotshot you’re trying to attract, few colors work this well at grabbing people’s attention.

Kendall Jenner has been more adept at creating controversy than style these past few months, but this Giambattista Valli outfit makes up for a multitude of wrongs. Featuring everything from a unique train to bow detail, it should be the model for every short 80s dress you consider this season.

Leather on leather should be your casual go-to this fall, but when you’re headed to a high-profile dinner party it’s time to pull out all the stops. Don’t even think about slipping on nylon tights or a cotton top. Every inch of your semi-formal attire should be rubbery and shiny. Vintage fashion requires nothing less.

If your short dress doesn’t have a belt, make one with a personality of its own. This can mean a stiff bow that flares upward across your chest or a long train of fabric that trails behind you like a maxi dress. It may seem a bit contrived, but what would 80s vintage be without over-the-top glam?

Selena Gomez is millennial as they come, but even she couldn’t resist fastening a little vintage fashion to this office chic vacation outfit. Clearly derived from 60s Hippie culture, her floral buckle encompasses multiple generations of iconic accessories. What gives it a slightly 80s edge are her sharp-shouldered Jacquemus top and vintage pumps. Clearly, if former Disney Channel stars are dressing in 80s couture, the trend is no mere fad.

For the foreseeable future, the 1980s are a sure bet in the fashion world. Frequent those thrift stores and find yourself some vintage outfits as flattering as these. The industry has spoken, the stars have spoken, and now it’s most definitely your turn.