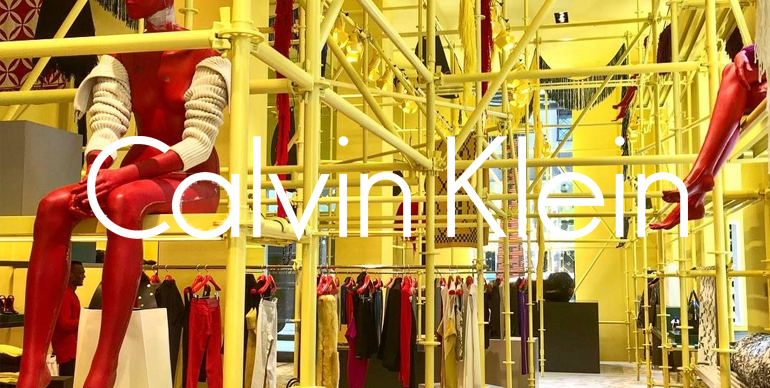 Raf Simons only took the reins at Calvin Klein a year ago, but one would think he’d had a tenure the length of a great like Karl Lagerfeld. Such an assumption isn’t based on his design work for the brand. When it comes to clothes, Simons has released the typical runway collections and been particularly slow at transferring his catwalk outfits to store racks. His perceived seniority comes from the extensive aesthetic overhaul that’s been going on at Calvin Klein for the past year. The label has revamped practically everything since Raf came on board one year ago. Their logo is new, their ad campaigns are new, and the company’s core artistic vision has shifted gears. This month, they’re debuting the first of many reimagined stores to finish the transformation. Whether you need some Calvin Klein for your wardrobe or not, this is a shop you don’t want to miss.

When artist Sterling Ruby saw the stark concrete columns outside the building that would become Raf Simon’s first Calvin Klein store, he knew what he had to do. Give the interior a jolt with something bright and tremendous so it would stand out in a city like New York. His solution was to paint everything canary yellow. Walking in is like a trip to the art gallery or a children’s museum. Walls, ceilings, and even the playful industrial scaffolding are all brilliantly painted. Few shops can attest to looking this inviting.

Refreshing and new as Calvin Klein’s new flagship store is, the brand hasn’t moved locations. Raf’s new yellow paradise still resides in the John Pawson building that’s been home to the label since it took off in the early 80s. Maintaining the locale means tried-and-true brand fans and enduring fashionistas can enjoy the new aesthetic while reflecting on images from the old days. Fashion, like any other artistic endeavor, is an industry founded profoundly on building blocks, each new trend drawing from the designs and innovations of the generation before. Raf and Sterling understood this and we applaud them for incorporating such a rich past into their revamped future.

The one overarching critique of Raf Simon’s takeover of Calvin Klein is that his new aesthetic hasn’t really materialized in a tangible way. You can purchase plenty of classic brand items, but the minimalistic Americana style he so boldly displayed in new campaigns and on the runway have been noticeably lacking in stores. New York City’s new CK store marks the end of the Simons era as being primarily philosophical. This August, each canary yellow rack, shelf, and tower at 205 W 39 will feature pieces by Raf. You can finally wear it in the streets.

When you enter the new Calvin Klein Universe on W 39th Street, it won’t just be the yellow that makes you feel all giddy inside. A labyrinth of industrial supports and crisscrossed pipes make the space seem even bigger than it was before and taps into that wonderful imaginary energy we all miss from childhood. Your enthusiasm owes a huge debt to Sterling Ruby’s jungle gym design. By keeping things open and busy, he has effectively made the store feel like an adventure rather than a shopping point. If you were doubting your ability to visit just for fun, let this element convince you otherwise.

Spacious, yellow, and stocked to the brim, the new CK store also manages to make you feel at home while you shop. Gone are the trappings of virtual dressing rooms and overwhelming shelves of clothes. In their place are spacious corners of carpet where you can see popular products laid out in their entirety. If not for the occasional logo on the wall, you could almost conceive of the space as a brightly-painted pent-house. If that’s not a reason to shop here, we don’t know what is.

Calvin Klein’s new store is the finest homage to Raf Simons’s company revamp an artist could muster. Lucky for us, it’s a public tribute we can all take part in. Next time you’re in the city, head to 205 W 39th Street and the canary yellow world that is Raf’s CK. We promise you won’t be disappointed.