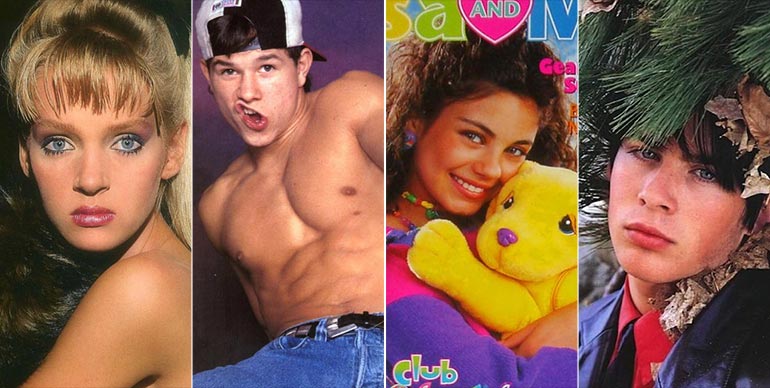 If your favorite movie star has a pretty face, odds are they are one of many actors who started as models. If you want to make a living while pursuing a career in film, modeling isn’t too bad a gig for the facial recognition. Why not get some experience in one cut-throat industry while trying to break into another?

I bet I know what you’re thinking. Actors who were models first were blessed with the good looks to become Hollywood stars all along. Modeling careers only come to those with pristine bodies and actress-esque qualities. Well, you’re right. Most of these top actors and actresses were eye candy from the start. That’s the whole point of this list, silly! Who doesn’t like to skim through some tasty images of handsome famous actors and beautiful models turned actress?

Seyfried’s modeling stint as a Cover Girl for tween fashion author Francine Pascal is a good reminder. Not all models turned actress stories are glamorous.

Even as a recent high school graduate in a 90s JC Penny ad, Jolie was poised to be a Hollywood star. Apparently, the actress was always a thigh-high slit kind of girl.

Appearing on the cover of a fictional magazine in a 90s tele-comedy is the ultimate example of model turned actress. Far better than running around as a Miller Lite girl (though she did that too.)

Of all pre-Hollywood modeling careers, this is one of the most iconic. How could a list like this forget to mention the Seventeen years of the model turned actress, Cameron Diaz?

Was it the highlights that cut his modeling career short? The model turned actor saga of Crawford is almost tragic. Who wouldn’t want that torso?

Once upon a time, one of the top actors in England was an adolescent poster boy for Burberry knits. I lament the knits but just look at that pretty boy face.

It’s no surprise Tatum’s work as a male stripper meant his path to stardom came through modeling. How many Hollywood stars can boast that intense smolder?

Actors who were models first know how to pull off pretty boy sultry. Somerholder’s classic piercing blue eyes did him and Versus a favor in the late 90s, even if he was decked out in a headdress of maple leaves.

Before dazzling us in The Notebook and WestWorld, Marsden wore awkward haircuts and sportcoats for Versace. No surprise one of Hollywood’s most handsome stars was a model first.

Connelly’s modeling career followed a very similar path to Diaz. If I didn’t hold so much pent up frustration with the gaudy 90s, I’d feel better about this.

Yup. I was complaining about Connelly and Diaz and then I saw this. I feel I should apologize for everything. I’m so so sorry, Mila Kunis.

The Calvin Klein skivvies were bad, but this. When famous actors have these kinds of fashion photos floating around, it can’t be a good thing.

Then again, this model turned actor began his work as a 14-year-old underwear model in China. How many modeling careers have you dressing up in undies, scarves, and socks?

Thurman was a true model before she turned actress. Her modeling career before Hollywood included cover shoots for Vogue and Harper’s Bazaar.