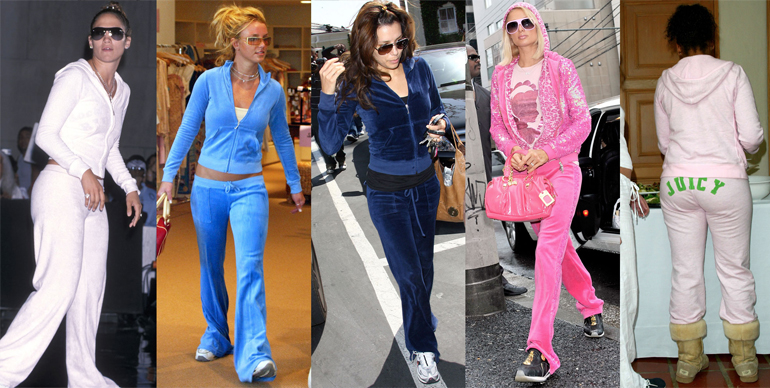 If the 90s renaissance made you realize just how long ago high school really was, the next nostalgic round of vintage-inspired fashion will have you in even more of a state. It’s not that this emerging trend emulates anything more questionable than the 90s. It’s hard to beat that sinking feeling in your stomach when you see someone seriously trying to pull off carpenter jeans or blossom hats. The issue is what decade is about to be crowned nostalgic. After only 7 years of separation, the 2000s are officially far enough away to reference like a retro era. For all of us who were finishing high school and heading off to college during the first decade of the 21st century, it’s a bit unnerving to watch our former mall purchases return as if dug up from the annals of fashion history. Nevertheless, this unsettling trend remains. Here are some of the best pieces of the Noughties resurgence. Get ready to feel out-of-date.

We could also call this the sports bra. Though born in the 90s, public adoration for the athletic crop top didn’t begin in earnest until the mid-00s. Remember the lady who wore it best? That’s right. Sports bras would be nothing without the mainstream stardom of Gwen Stefani.

You could argue that this colorful hair clips actually came of age in the 90s, but everyone was spending money on them in the early Noughties too. Perhaps they were nostalgic memories from childhood even way back then. Either way, we’re still glad to have them back.

Believe it or not, BeBe and other gaudy brands like it are making a real return. Stores are already stocking up on velour tracksuits in bright 90s pink with heart-shaped zippers on the front. Seems we haven’t completely outgrown craving the ideal athleisure douche.

Steve Madden has returned and he’s bringing with him those thick-soled sandals that made you look awkwardly tall as a lanky teenager walking the Boardwalk during summer break. The last in a long line of platform footwear to stage fashion comebacks, it definitely deserves a place in your summer wardrobe.

When corsets returned earlier this year for a moment in the spotlight, little did we guess things would come to this. Think what you will, but it seems Britney’s infamous all denim get-up for the VMAs has returned. The question is, will you partake of this strange manifestation of the gunner top? And don’t mask your decision behind your love for Justin Timberlake.

It’s the one nostalgic trend that seems to have made a name for itself in the 2010s. Though these knapsacks began as high school packs with keychains for collectibles, they’ve evolved into the new handbag of choice for contemporary fashionistas. Take advantage of back to school sales and grab one for your office ensemble.

Baseball caps are still in style, but it’s a distinctly 90s look to don a pastel hat embossed with Sanrio characters. Never mind the emotions. This item is exactly the type of clothing you’d hope would eventually emerge from 2000s vintage. Something clear and fun to remember the past by.

The 90s gave us tattooesque chokers with nothing but defined patterning. Once the 2000s hit, chokers took on a more 3D feeling thanks to medallions and other hanging adornments. Be prepared for those simple add-ons to start flooding in soon. Necklaces just got more interesting again.

In 2017, the 2000s is a nostalgic decade. It’s a time we can look back on with a tinge of reflective happiness. Thanks to the fashion world, we can wear it again too. Just don’t let it completely take over your wardrobe.